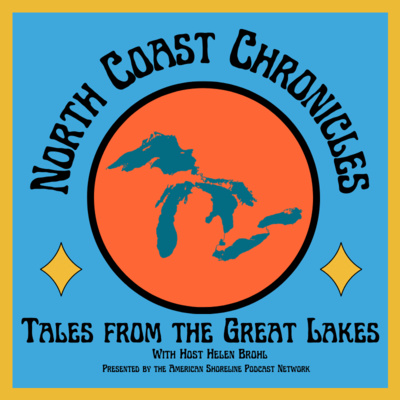 North Coast Chronicles: Tales from the Great Lakes journeys to Lake Erie with CDR Matt Jaskoski, Commanding Officer of the NOAA Survey Ship THOMAS JEFFERSON.  After 35 years, NOAA returns to the Great Lakes to update hundreds of nautical charts to modern standards.  While not exactly updating lead line surveys (the real old fashioned charts), many charts were last updated when bathymetry surveying was single dimensional and limited in detail.  Homeported in Norfolk, Virginia, the THOMAS JEFFERSON is used to map the ocean to aid maritime commerce, improve coastal resilience, and understand the "marine" environment. The THOMAS JEFFERSON ventured up the East Coast and into the St. Lawrence River, Lake Ontario, around Niagara Falls through the Welland Canal and into Lake Erie where it has been running survey operations to understand the "lake" environment!  Commander Jaskoski talked to us while on the ship in the Erie, PA area after having already surveyed around the Lake Erie islands in the western basin.  We learn when and how they use launches to manage near shore surveying, what it's like to live on the ship, and how to find a career with the NOAA Corps sailing for science!

Show Transcription
This transcription was generated by a computer. Please excuse any errors.
Helen Brohl

Helen Brohl is a Great Lakes gal, having grown up on the south shore of Lake Erie and a lifetime of summers on Middle Bass Island. Helen understands the Great Lakes as a valuable resource with a Master's Degree from The Ohio State University in Great Lakes Land and Water Use Policy and as an economic engine for the nation with almost 40 years of experience in maritime transportation and trade development. Helen previously worked as professional staff on the U.S. Congressional House Merchant Marine and Fisheries Committee, with NOAA's Office of Coast Management, did trade development for the Great Lakes St. Lawrence Seaway Development Corporation, was the Director of Marketing for the Port of Chicago, the Executive Director of the U.S. Great Lakes Shipping Association, and is currently the Executive Director of the U.S. Committee on the Marine Transportation System in Washington, DC. Follow along as Helen shares the nature, folk lore, and charm of the Great Lakes!