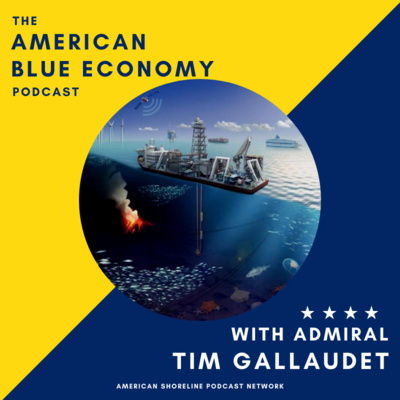 Remembering why we love the ocean

In this episode, host Admiral Tim Gallaudet explores Tourism & Recreation, major components of the America’s Blue Economy. Our topics will include such cool coastal activities  as surfing, sailing, boating, diving, foiling, and fishing, as well as ocean and coastal conservation which is essential to sustaining the beauty and health of these special places. We will also discuss the role of National Marine Sanctuaries, Aquaria and Science Centers, and  public and private media in expanding awareness of tourism and recreation opportunities and the environmental protection measures which support them. We will be joined by an absolute A-List of professionals in the sector of ocean, coastal, and Great Lakes Tourism, Recreation, and Conservation, including: Ian Cairns: Champion Surfer, and Co-founder of Surfing.com and the television series, World of Waves; Mehgan Heaney-Grier: Pioneering American freediver, stunt diver, television celebrity, conservationist, and  educator; Margaret Spring: Chief Conservation & Science Officer, Monterey Bay Aquarium; Bruckner Chase: Founder, Ocean Positive Foundation, accomplished paddler and ocean distance swimmer, and David Ruck: Producer, Great Lakes Outreach Media, and highly talented and accomplished in coastal video production.

Show Transcription
This transcription was generated by a computer. Please excuse any errors.
Adm. Tim Gallaudet

Rear Admiral Gallaudet, PhD, USN (ret) is the CEO of Ocean STL Consulting. From 2017-2021, he served as the Assistant Secretary of Commerce for Oceans and Atmosphere / Deputy NOAA Administrator, and from 2017-2019 he also served as the Acting Under Secretary of Commerce for Oceans and Atmosphere / NOAA Administrator. As Acting Administrator, he led the agency comprised of 20,000 federal employees and contractors managing the nation’s fisheries, coastal resources and waterways, weather satellites, weather services, and environmental research, overseeing a $6B annual budget and daily operations of 18 environmental satellites, 16 oceanographic ships, 9 aircraft, 450 boats, and 400 technical divers, 6 supercomputers, over a dozen laboratories, and several hundred field sites across the country. As the Deputy Administrator, he led NOAA’s Blue Economy activities that advance marine transportation, sustainable seafood, ocean exploration and mapping, marine tourism and recreation, and coastal resilience. Prior to NOAA, Rear Admiral Gallaudet served for 32 years in the US Navy, completing his career as the Oceanographer of the Navy. He has a Bachelor’s degree from the US Naval Academy, and Master’s and Doctoral degrees from Scripps Institution of Oceanography, all in oceanography.