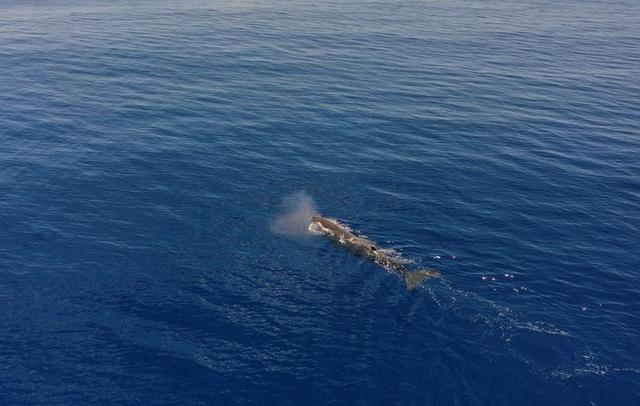 MASCARENE PLATEAU, Indian Ocean (Reuters) - Over two weeks at sea, the scientists spotted pilot whales and spinner dolphins, orcas and more. But not a single sperm whale had crested the choppy waters of the western Indian Ocean.

Then, an underwater microphone picked up a series of unmistakable clicks and squeaks. A large pod of the endangered whales was nearby. And from the sound of it, they were feeding.

The scientists are on a monthlong quest to document whales and other marine mammals living around the Mascarene Plateau, hoping to bolster arguments for protecting the remote 2,000-km underwater ridge to both fight climate change and protect ocean wildlife.

“We’re actually generating some of the first baseline data for this area on marine megafauna, and that feels quite exciting,” said Exeter University biologist Kirsten Thompson, one of the scientists on the Greenpeace research expedition.

For sperm whales, the largest of the toothed whale species, “the only data from this area comes from the whaling days,” she said. The group of researchers hopes also to draw attention to the U.N. campaign aimed at persuading countries to protect at least 30% of the planet’s land and ocean by 2030.

The plateau is a conservation target partly for the world’s largest seagrass meadow carpeting its Saya de Malha Bank, which absorbs climate-warming carbon dioxide and provides a vast wildlife habitat. Whales, meanwhile, are also key to combating global warming. They release tonnes of iron a year in their faeces, which feeds CO2-absorbing phytoplankton.