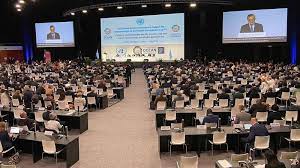 The UN Ocean Conference concluded its panels discussions in Lisbon, with governments and heads of state agreeing on a new political declaration to save the ocean.

They also made voluntary commitments to conserve or protect at least 30 percent of the global ocean within Marine Protected Areas, and other effective area-based conservation measures, by 2030.

Adressing that climate change is “one of the greatest challenges of our time”, and the need to “act decisively and urgently to improve the health, productivity, sustainable use and resilience of the ocean and its ecosystems”, top decision makers gathered in Lisbon affirmed that science-based and innovative actions, along with international cooperation, are essential to provide the necessary solutions.

They affirmed the need to address the cumulative impacts of a warming planet, on the ocean, including ecosystem degradation and species extinctions, calling for transformative change.

In the same context, many partakers announced that they will take more action to commit serious new resources to the fight against IUU fishing, with nearly $250 million pledged via policy, governance, on-the-water assets, technical assistance, and innovative forms of monitoring and traceability.

In this regard, the United States announced more than $160 million to support coastal resilience through the National Coastal Resilience Fund.

They gave more than 100 commitments, worth more than $2.6 billion, including contributions from at least 13 departments and agencies. Because protecting our ocean is an “all-hands-on-deck” effort.

“We are bringing together 21 agencies with an integrated, government-wide response to IUU fishing globally under the Maritime Security and Fisheries Enforcement Act, ” the U.S. representative said.

Similarly, Australia announced $700 million to protect the Great Barrier Reef, while the Green Climate Fund also announced an anchor commitment of up to $125 million, to be implemented by Pegasus Capital Advisors, to fight coral reef degradation.

In addition to this, the Republic of Korea announced $100 million per year to address the scourge of plastic pollution.

The declaration, which consists of a seven-page document, stated that innovative financing solutions must be found to drive the transformation towards sustainable ocean-based economies, and scale up nature-based solutions, as well as ecosystem-based approaches to support the resilience, restoration, and conservation of coastal ecosystems.