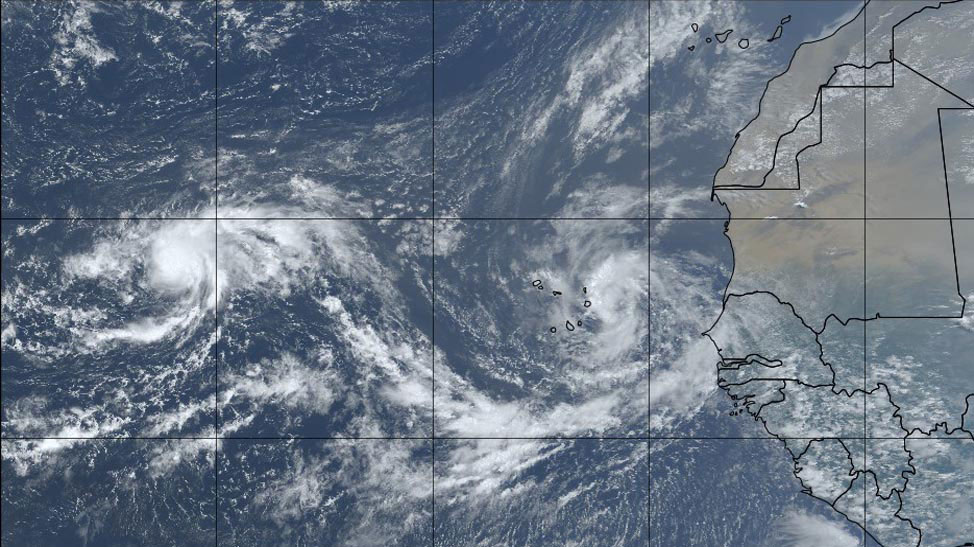 The 2020 parade of record-early named storms in the Atlantic continued on Monday, September 7, with the formation of Tropical Storm Paulette in the central Atlantic. Paulette has been joined by Tropical Depression 18 (TD 18) in the eastern Atlantic, which will likely become Tropical Storm Rene later on Monday. Neither storm is on a track that poses a long-range threat to the Caribbean or U.S.

A west-northwest to northwest track into the central Atlantic

Steering currents will carry both Paulette and TD 18 to the west-northwest or northwest during the week. This will put them into the central Atlantic in a location where few tropical cyclones ever go on to make a landfall in the Caribbean or the U.S., making them excellent candidates to be “fish” storms – tropical cyclones primarily of concern to shipping, with no impact on any land areas. There are two exceptions: TD 18 may bring tropical storm conditions to the Cabo Verde islands on Monday evening through Tuesday, and Paulette could affect Bermuda by the middle of next week.

It is likely that as Paulette gets stronger, it will move farther north, where strong winds of an upper-level trough expected to form north of Puerto Rico later this week will have a greater influence on a stronger storm. This trough is also likely to bring higher wind shear, weakening Paulette.

TD 18 is less likely to experience high wind shear from this trough, and more likely to become a hurricane. TD 18 may move slightly faster than Paulette, allowing the two storms to grow close enough late this week to affect each other’s track and intensity.