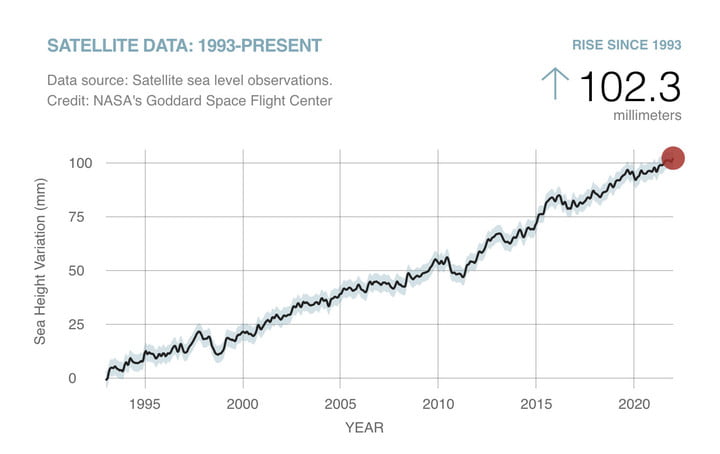 World - This is how NASA measures rising sea levels from space

Climate change is an imminent threat to humanity’s future, but the global climate is so complex that it’s often hard to even see the scale of the problem. One of the best ways we have to measure climate change might not be what you expect – because it’s not about measuring the land or the atmosphere. Instead, to learn about climate change, we need to measure the ocean.

The rising of sea levels not only affects coastal communities by reducing land mass, but also indicates the wider issue of rising global temperatures. That means sea level rise is of great importance to NASA, which doesn’t just look out to other worlds, but also monitors the Earth from space. A new sea-level monitoring satellite, Sentinel-6 Michael Freilich, was launched in November 2020 and became the official reference mission for sea level rise in March this year, after taking over from its predecessor, Jason-3.

With Sentinel-6 taking on its new role, and a twin successor, Sentinel-6b, waiting in the wings to take up the baton when required, we’re set for the next 10 years of sea level measurements. You can even see for yourself where Sentinel-6 is located over the Earth right now, by tracking it using NASA’s Eyes web application.

We spoke to Josh Willis of NASA’s Jet Propulsion Laboratory, project scientist for both Sentinel-6 and Jason-3, about how to measure sea level rise from space.

Our scorecard for climate change

Sea level rise isn’t only important to understand the changing oceans. It’s also one of the most valuable tools we have for measuring climate change as a whole. “In a way, it’s a scorecard,” Willis said. “It’s our scorecard for how we’re doing with the climate.”

That’s because much of the rising average temperature of the planet as a whole is reflected by the level of the oceans. There are three big human-caused factors contributing to sea level rise: The melting of the ice sheets in Greenland and Antarctica, the melting of small glaciers elsewhere around the globe, and the warming of the ocean that’scausing it to expand. These factors contribute roughly one third each to the total rise, due to more water being added to the oceans when glaciers and ice caps melt, as well as the expansion of the water due to increasing global temperatures. As the oceans cover so much of the globe, they end up absorbing a lot of the excess heat generated by human activity.