International
More than half of adults on the planet say climate change has already had a severe impact. Image: Ipsos 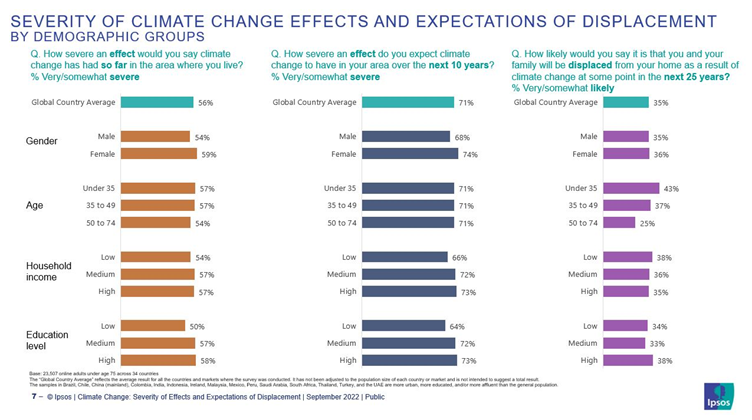 More than half of adults say climate change has already had a severe impact on their lives, according to a new survey. And over a third expect to be forced from their homes by climate change within 25 years. Seven in ten expect severe impacts to affect their countries within the next decade.

More than half of adults on the planet say climate change has already had a severe impact on their part of the world and a third fear it may force them from their homes, according to a new global survey commissioned by the World Economic Forum.

Across 34 nations from Mexico to China and South Africa to Sweden, an average of 56% say climate change is already having severe effects. More than 70% of people in Mexico, Hungary, Turkey, Colombia and Spain say they’ve experienced severe climate change.

The survey found marked regional differences within countries mirroring recent extreme weather events like heatwaves. For example, the percentage of people reporting severe impacts was higher in Greater London than the rest of the UK.

In North America, more people in regions that have suffered from extreme heat, drought and forest fires such as British Columbia and the western United States reported severe impacts than in the rest of their countries.

Majority across 34 countries describe effects of climate change in their community as severe, Ipsos in Canada / September 15, 2022

The percentage of people saying they had experienced severe effects was also higher in south-eastern France, southern Germany, north-eastern Italy, and eastern Hungary than in other areas of those nations.

Only in Sweden, Ireland and Malaysia do fewer than four in ten believe the effects are already severe. But, even if everyone isn’t seeing dire effects today, an average of 71% - including a majority in every country surveyed - expect severe impacts within a decade.

Forced to flee from climate change

Equally alarming, an average of more than a third (35%) of people across the globe expect they and their families will have to leave their homes at some point in the next 25 years because of climate change.

Fear of being forced from their homes is greatest among under-35s, with 43% saying it’s likely to happen compared to 37% of 35-to-49 year olds and just a quarter of over-50s. Almost two-thirds of people in India and Turkey fear losing their homes to climate change.

Almost half of people in Malaysia, Brazil, Spain and South Africa also expect to be forced from their homes in the next 25 years compared to just 17% in Sweden and 21% in Argentina and the Netherlands.

“We are in a climate crisis. The survey results affirm that across the world, people already feel the effects today and fear for their futures tomorrow" said Gim Huay Neo, Managing Director, Head of the Centre for Nature and Climate, World Economic Forum.

“The crisis affects everyone. We have to work together, to adapt to climate change, and concurrently, accelerate and scale action towards a healthier, greener, and more sustainable planet. We need a holistic and systems approach, involving all stakeholders – governments, businesses and civil society – to co-create solutions and effectively respond to this crisis.”

More than 23,500 people under the age of 75 took part in the survey and concern about climate change is shared across age groups and genders although slightly more women (59%) compared to men (54%) say they have experienced severe effects.

Three-quarters of women expect the effects to worsen in the next decade compared to two-thirds of men. The Forum survey mirrors a June 2022 study by Yale Universityconducted through Facebook in which a majority saw climate change as a threat to future generations.

Who should tackle the climate issue?

The Yale study found the majority of people in 192 countries were worried about climate change. But there was less agreement about who should tackle the problem: majorities in 43 countries said governments; 42 countries said individuals; and 25 said businesses.

The World Economic Forum’s Global Risks Report 2022 ranked extreme weather and climate action failure among the top three global threats for the immediate future. Failure to act on climate change was ranked the most significant risk over the next decade.

In a survey conducted for the Forum in November 2021, 74% of respondents agreed that climate change was caused by humans and almost 70% said they trusted climate scientists - but only half were optimistic that global carbon emissions could be reduced within 20 years.