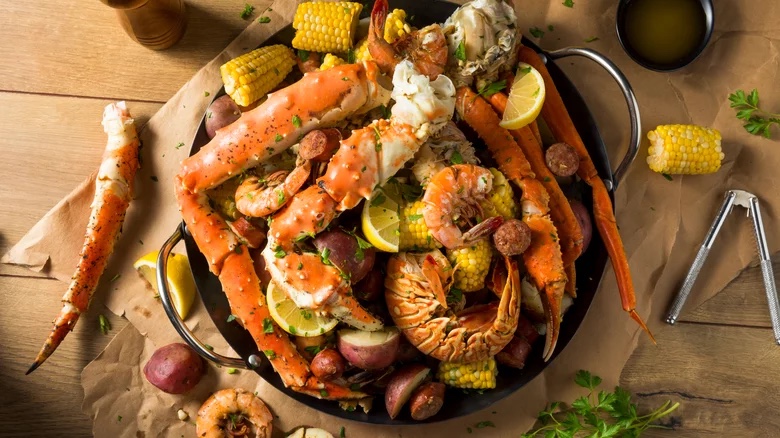 Seafood boils aren't all created equal. What distinguishes the Gulf and East Coast styles are the actual proteins (and other ingredients) involved, the spices and seasonings, as well as the actual method of cooking.

The summer months are all about enjoying your surroundings in the company of more than just a few good friends. Picnics are a universally fun and popular way to soak up some sun and divulge in good food, drink, and socializing. In fact, they're so popular that July has been designated as National Picnic Month, according to Days of the Year. Picnics are epic because they're universal — every culture has some form of this outdoor gathering, but no two are the same. The Smithsonian says that in the UK, they enjoy an assortment of foods like scotch eggs and potato salads. Having barbecues at the beach is the standard picnicking norm in areas where the climate is a bit hot or humid (like Hong Kong and India). Sitting under cherry blossom trees and enjoying watermelon and bento boxes is the Japanese picnic of choice (via Guru Navi).

In the United States, any open space can pretty much be utilized as a picnicking place, and when it comes to the most famous communal food gathering, no one does it better than the Gulf and Atlantic coastal seafood boil. These gatherings typically play out during the spring and summer months, when the weather is humid and unrelenting. Seafood boils have been going on since before the United States became the United States. So what exactly is it? Go get your grill prepped and your iced tea brewing, then read on to discover the untold truth of the seafood boil.

There are technically four types of seafood boils

Lobstergram (a specialty seafood delivery company) explains that Louisiana and Gulf Coast mainly boil crawfish and shrimp, and the occasional crab. These boils are also more vegetable-heavy, according to The Healthy Fish, and also contain corn, red potatoes, hard-boiled eggs, celery, onion, and lots of spice. South Carolina and Georgia stick with shrimp boils, adding in sausage, potatoes, corn, and sometimes ham. These regions typically stay away from adding extra spices and let the true flavors of the individual ingredients shine on their own.