International
Trends in global surface temperature by decade for 1880–2017 (top map) compared to trends for 1988–2017 (bottom map), showing the rapid warming of the past 30 years. Maps by NOAA Climate.gov, based on data from NOAA NCEI. 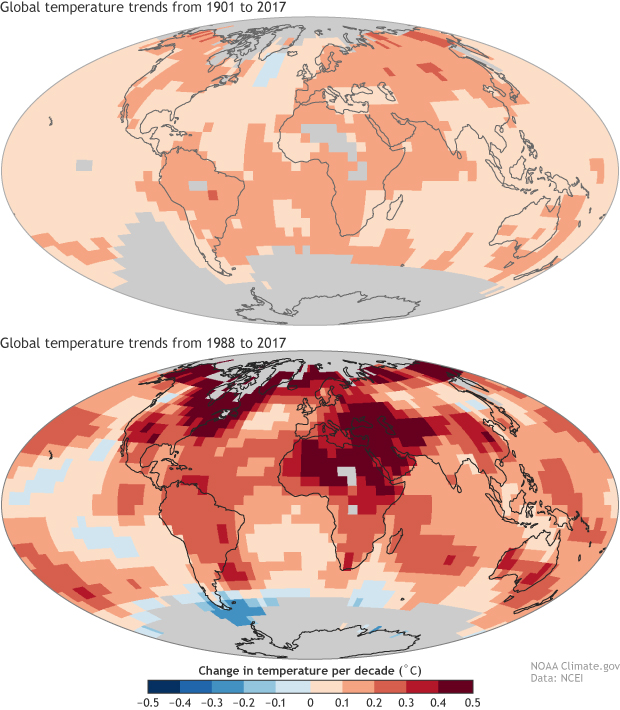 The climate crisis has no sympathy for the crowded news cycle, or our fried minds.

Yesterday, a group of researchers published a paper in which they substantially narrowed the projected temperature range for global heating should carbon dioxide emissions double from preindustrial levels; the range has previously been cast as being between 1.5 and 4.5 degrees Celsius, but the researchers tightened it to between 2.6 and 4.1 degrees Celsius. Andrew Dessler, a climate scientist who reviewed the research, called it “probably the most important paper I’ve read in years.”

Also this week, a group of major investors urged the Federal Reserve and the Securities and Exchange Commission to take action to avert a climate-related economic catastrophe, including by forcing companies to disclose their climate footprint and risk. The normally-frigid tundra of Siberia has seen record heat and widespread fires, which have likely accelerated melting sea ice in the Arctic. And, as Earther’s Yessenia Funes wrote yesterday, “Hurricane season is unfortunately alive and well, folks.” Last night, the National Hurricane Center warned that Douglas, a storm in the Pacific, is now a Category Three hurricane, and could cause flooding in Hawai‘i this weekend. Linking individual storms to climate change is fraught—but climate change has generally made storms worse.

Despite the hellish intensity of the present news cycle, we continue to see outstanding climate journalism. Beat reporters—including at Earther, Grist, and HEATED, Emily Atkin’s climate newsletter—are doing sterling work, as ever. Major news organizations have made room for enterprising climate reporting, too. This month, Time magazine published a special issue under the strapline, “ONE LAST CHANCE”; its cover illustration, by the artist and scientist Jill Pelto, incorporated climate-trend data—average global temperature, land ice, and more—into an image of a mountain and the ocean.