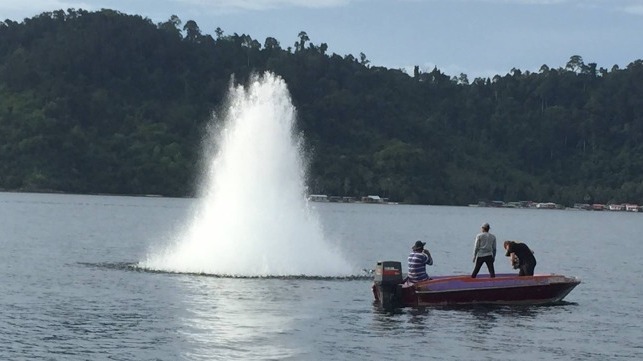 At the sound of a muffled “boom”, the divers pause and look uneasily at each other and their divemaster. Luckily, the blast seems far enough for the group to continue exploring the colourful reef.

Bottles, usually containing a mix of ammonium nitrate fertiliser and petroleum, are fitted with a timed fuse and dropped into the water. The ensuing explosion kills or stuns fish, which are then scooped out of the water. It is also known as blast or dynamite fishing.

Fish-bombing is the stuff of nightmares for the diving industry in Sabah state, Malaysian Borneo. Not only does it put off the tourists, it also devastates marine life and endangers the fishers themselves.

Action to address the practice has been ongoing for at least 16 years across several Asian countries. In Sabah, this action has intensified in the last six years as tourism has become increasingly central to the state’s economy and coastal communities. Programs have been run by various concerned stakeholders and the government-led Anti-Fish Bombing Committee. As a result, there has been a decline in the practice in Sabah.

In March last year, Covid-19 abruptly shut down tourism in Sabah, cutting off this vital source of income and increasing food insecurity for local communities. So far, data shared with China Dialogue Ocean from former fish-bombing hotspot the Mantanani islands, as well as information from other monitored islands, indicate the illegal practice has not increased. But as the tourism drought continues, some fear desperate fishers will return or resort to fish-bombing and other unsustainable practices. In its 2020 report on fish-bombing in Mantanani, the NGO Reef Check Malaysia sounded a warning note: “The impact of the pandemic on jobs reliant on tourism will contribute to community members becoming fish bombers again.”