Michael Markovina. A coral Reef along the coast of Pemba Island, Tanzania. 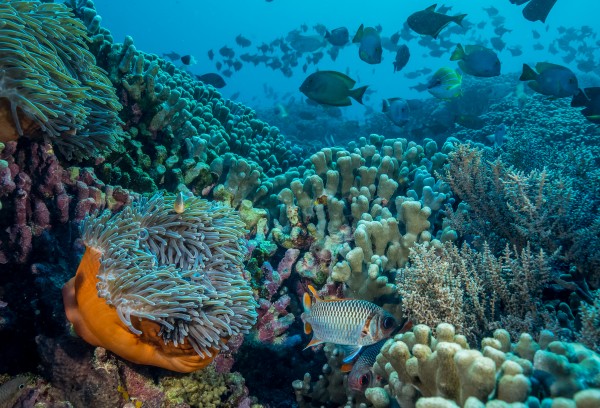 WORLD - Study Finds Only 2.5 Percent of the World’s Coral Reefs Are Currently Being Actively Protected

A new global study has found that only 2.5 percent of tropical reefs are formally protected and conserved through laws and regulations. These numbers are significantly lower than previous estimates, and highlight an urgent need for governments, communities, and partnering organizations to create and expand marine reserves to protect these ecosystems which support more than 500 million people worldwide.

The study, authored by Tim McClanahan of WCS (Wildlife Conservation Society), is titled “Wilderness and conservation policies needed to avoid a coral reef fisheries crisis” and appears in the latest edition of the journal Marine Policy.

“A brewing crisis for tropical fisheries is emerging due to the lack of protection for reef ecosystems, and the increasing impacts of climate change,” said Dr. Tim McClanahan, lead author of the study and senior WCS coral reef scientist. “For fisheries to be sustainable, there must be refuge zones where vulnerable fish populations can rebound. We need to take action now to formally, legally protect and conserve coral reef ecosystems for the benefit of the fish, and people, that rely on them.”

A central crux of this global coral reef analysis focuses on the two types of protection for reef ecosystems: passive and active.

Passive protection occurs when a reef is simply located so far from humans that the ecosystem is left mostly alone thanks to its remoteness. The study found that between 12 and 48 percent of coral reefs are passively protected, located far afield from people and cities in ocean wilderness zones.

Active protection occurs when a reef is part of a formal marine reserve, similar to a national park, protected by laws and regulations enforced by governments. Only 2.5 percent of reefs were found to be “actively” conserved, a figure much lower than previous, more-optimistic estimates.

A further cause for concern was that most of those formally protected coral reefs were located four or more hours from the nearest human settlements, which means they qualify as reefs that would have been “passively” protected by virtue of their remoteness.

This indicates that marine protected areas are often not being placed strategically to benefit the nearshore fish populations and human communities that need them most. Instead, they are being deployed in far afield ecosystems that are often relatively untouched.