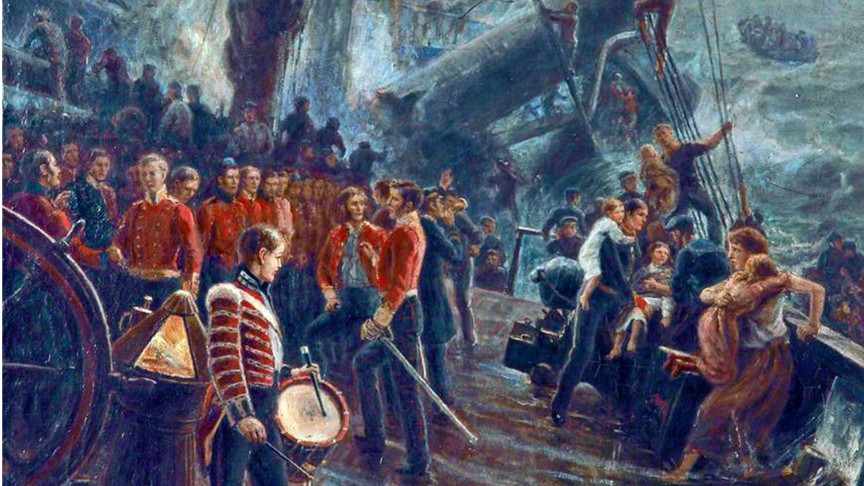 World - Sinking of HMS Birkenhead: The Origin of "Woman and Children First"

On the 26th of February 1852, a British troopship, HMS Birkenhead sank off the coast of South Africa while carrying reinforcements. She would never reach her destination. The HMS Birkenhead's plight still echoes down the ages.

The bravery and discipline shown by the British soldiers on board, despite their impending doom, would echo down the ages to the modern-day.

The ship sank very quickly, but the men would stay with the ship to keep the lifeboats from being swamped and ensure the survival of the women and children on board. An event still honored today with the tradition of "woman and children first" in times of peril.

What is the origin of "women and children first"?

While most commonly associated with events like the sinking of the Titanic, the origin of this saying actually dates back to the lesser-known tragedy of the HMS Birkenhead.

The events of the ship's sinking would be immortalized in song and history, and lead to the "Birkenhead Drill" — the informal, yet now standard practice of evacuating women and children first when a ship is sinking.

The story of the sinking is both tragic and inspiring in equal measures and is well worth spending a little time exploring. You may even find yourself shedding a tear.

Let's take a little trip back in time...

What was the HMS Birkenhead?

On the 25th of January 1852, the iron-hulled paddle steamer, HMS Birkenhead, set sail from Portsmouth for what was meant to be a routine troop transport mission. First laid down as the naval frigate HMS Vulcan, she was one of the first iron-hulled ships to ever enter the service of the Royal Navy.