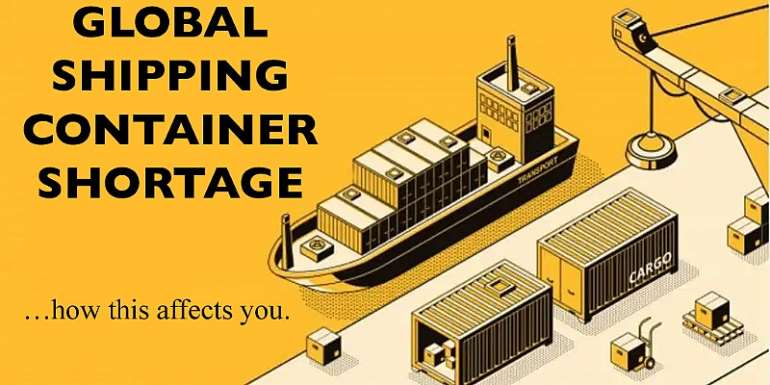 From January 2020 to April 2021, the volume of cargo that have been through Chinese ports was almost 19.5 billion tonnes. Within the same period, the container throughput stands at over 350 million 20FT container equivalent units

Since the pandemic, China has been recovering faster than many other countries, with their export figures rebounding spectacularly after the first half of 2020. Western countries started buying large volumes of products from China, especially the United States of America. So, huge volumes of shipping containers had to leave Chinese ports.

Cargo for ocean freight are transported in metal containers. When these shipping containers are delivered to the port of destination, they usually circle back to the port of loading, albeit many make a few stops along the way when required. When it gets back to the original port, the process repeats itself.

That has not been happening. It’s because China is currently shipping way more to the US, Europe and the rest of the world than it is importing. China has been moving a lot of shipping containers to their biggest markets and these containers do not circle back to facilitate other exports.

Millions of shipping containers were stranded at many locations around the world when the pandemic started. Congested ports also did not have the needed manpower to process customs procedures in a fast manner. These hampered global container circulation.

The story is not the same in most parts in the world. A shortage in this instance means shipping containers are congested somewhere, concentrated elsewhere, not repurposed or out of commission.

A few months back, Bloomberg reported on a massive backlog of 28 container ships that were waiting to enter just the US ports of Long Beach California and Los Angeles. An additional 16 ships full of containers were expected to arrive over the following three days. A week before that, it was 26 container ships. Reports from officials monitoring marine traffic in San Pedro Bay indicated it was less than the 40 container-vessels backlog peak back in February 2021.

Also, back in March 2021, one of the world’s largest container vessels, a 400m-long 200,000-tonne ship called The Ever Given, got stuck in the Suez Canal and frustrated the entire global shipping industry. About 12% of global trade use the canal daily. So it’s understandable how and why it became such a big deal.

The Ever Given got stuck after it run aground and wedged sideways across the canal, blocking passage for other ships. There were over 360 ships that were waiting on either sides of the canal to cross during this blockade. This contributed to the current shortage of containers globally. It made worse an already ailing world container circulation.

During the second half of 2020, ecommerce traffic exploded all over the world. Amazon profits have soared past 200% since this pandemic begun. China represents a very large volume of suppliers for ecommerce websites and China is currently shipping more to the US and Europe than it is importing.

You’d have to also factor in the fact that over the last few decades, there has been a lot of outsourcing to China. So already, China has been exporting massively to many parts of the world. This global container shortage situation has been a problem waiting to happen, only very much exacerbated by the current COVID pandemic.

Heavy competition for available containers have sent shipping rates through the roof. The whole situation looks dreadful when you factor in the current limited air freight capacity since the pandemic started. The Airline industry have been dealt a heavy blow with record low number of flights.