International
Figure 1Overview of the currently known main marine mineral resources (marine placers, phosphorites, and polymetallic nodules) on the continental shelf, which have extraction potential defined by their proximity to coast and the depth of the resource. 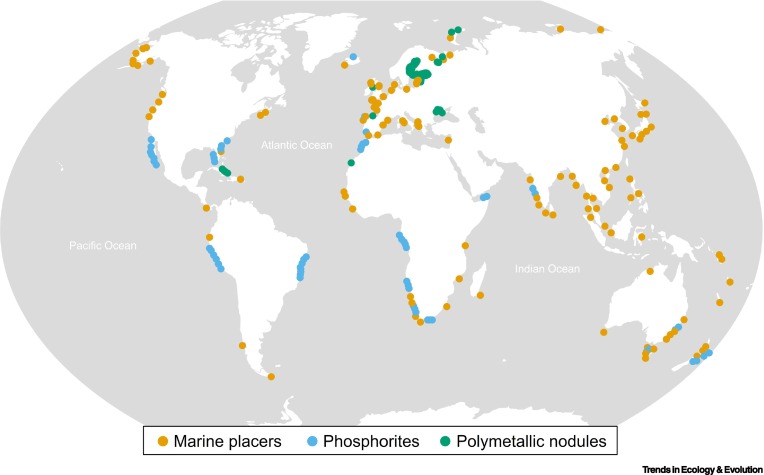 Coastal mineral resources are promoted as a sustainable option to meet increasing metal demands. However, shallow-water mining contradicts international conservation and sustainability goals and its regulative legislation is still being developed. In the absence of thorough comparisons of different mining practices, there are no justifications in favour of shallow-water mining.

Continental shelves as a source of critical metals

The functioning of our modern society relies on metals used by the technology, infrastructure, and energy sectors. The scarcity of land-based ores and the transition to low-carbon technologies call for new solutions to the increasing mineral demand

The term ‘seabed mining’ refers to the extraction of high-value commodities, such as metals or gemstones, from the seabed. The term is used for both deep-sea and shallow-water mining activities and thus encompasses a range of activities under different environmental and regulatory contexts. Shallow-water mining is not strictly defined by depth, but rather, shallow-water operations are usually considered to be those occurring on the continental shelf with easier access to the coast, as opposed to deep-sea operations that target less accessible resources and require specialised technology.

Despite active discussions about the use of deep-sea minerals, seabed mining is a relatively small industry and only a fraction of the known seabed mineral deposits on continental shelves are exploited currently. The main types of shallow-water minerals include: (i) mineral rich sands; (ii) polymetallic nodules and phosphorites; and (iii) placer deposits, consisting of metallic minerals or gemstones, such as tin, gold, or diamonds. While sand and gravel are the most mined materials in the world, their extraction is often considered a separate industry.

Most commercial seabed mining plans target metal-rich deposits from the deep seabed (below 200 m and up to ~5 km deep). While the economic potential of deep-sea minerals has been recognised for decades  the implementation of deep-sea mining has been held back due to concerns over the environmental impacts of mining activities on largely unknown deep-sea ecosystems, potential socioeconomic conflicts, incomplete governance frameworks, and high operational costs in offshore areas.

In light of these challenges and the resulting calls for a moratorium on deep-sea mining the geological resources of the near-shore continental shelves around the world (Figure 1) have been suggested to be a comparatively low-risk option to satisfy our metal and mineral demands.

Shallow-water seabed mining targets high-value commodities (including metal-rich minerals) on the continental shelf in water depths up to 200 m, sometimes extending deeper. However, the expansion of shallow-water mining as a means to meet the demand for minerals has not been critically evaluated, despite it being even more imminent than deep-sea mining given the already existing technology.

Sand and other aggregates (see Glossary) have been extracted from coastal areas for decades to be used in construction and the improved methods to exploit these resources have led to several shallow-water mining initiatives in the past decades [8.]. One of the most iconic examples of shallow-water mining is the offshore diamond mining initiated in Namibia in 2002, in water depths up to 130 m. Comparable placer deposits are also dredged off the coast of Indonesia to 70 m depth, where dredging of tin placers is the largest marine metal mining operation in the world. In New Zealand, extraction of iron-rich sand has been proposed from 20–70 m, and in Mexico mining marine phosphorites has been proposed in water depths of 50–100 m. While both initiatives have raised considerable environmental concerns, the iron-sand mining permit in New Zealand was rejected, yet the phosphorite mining interests in Mexico continue to seek approval from the environmental authorities. The most recent addition to large-scale shallow-water mining comes from the northern Baltic Sea. In November 2021, a Swedish seabed mining company applied for a research permit to explore the seabed in the Bothnian Sea. If approved, the aim of the exploration is to test-mine polymetallic nodules and eventually to commercially exploit them at depths of 60–150 m. Similar iron-manganese deposits have previously been extracted in an exploratory setting in 2007 by a Russian mining company in the eastern parts of the Baltic Sea.

As shallow-water mining has not been previously considered in many areas, its environmental regulation is inadequately reflected in national legislations. This regulatory grey area may be seen as an opportunity to circumvent stringent rules, or as a bottleneck to potential mining operations, depending on the existing regulation in place in each region. Despite regulatory uncertainties, concerns about environmental impacts, and strong civil resistance towards coastal mining operations [9.], the regulatory and technical complexity of operating in deep international waters is likely to encourage further initiatives for shallow-water mining.

Compared with terrestrial mining and costly deep-sea mining operations, shallow-water mining may save operational costs, as mining takes place closer to shore and uses existing technology. Dredging shallow seafloor minerals is efficient, with dredge rates for raw sediment material from the seabed up to 2500 m3 per hour. While these aspects render shallow resources attractive from an economic standpoint, mining shallow-water resources does not come without risks. Mineral extraction removes the sediment, resident seafloor organisms, and ultimately the habitat, potentially resulting in local extinctions and changes in species composition. In addition to altering seabed morphology, mineral extraction results in degradation of water quality through sediment plumes that increase water turbidity and smother organisms. There is also potential release of harmful substances from the sediment and disturbance to marine organisms via noise, light, and vibration from the operations [10.].

Although coastal seas are generally better studied than the deep sea, the specific impacts of shallow-water mining have been overlooked. While many impacts can be inferred from parallel industries, such as dredging, the long-term environmental consequences are still uncertain. Key knowledge gaps include lack of information on the spatial footprint of potential mining activities and their impacts on ecosystem functions and services. Shallow-water mining exerts additional pressures on vulnerable coastal ecosystems which are already burdened with cumulative impacts from human activities and the effects of climate change, making them less resilient to new human activities. Despite faster recovery times of shallow-water ecosystems compared with vulnerable and slow-growing deep-sea communities, the overall environmental footprint of mining will be significant also in shallow areas.