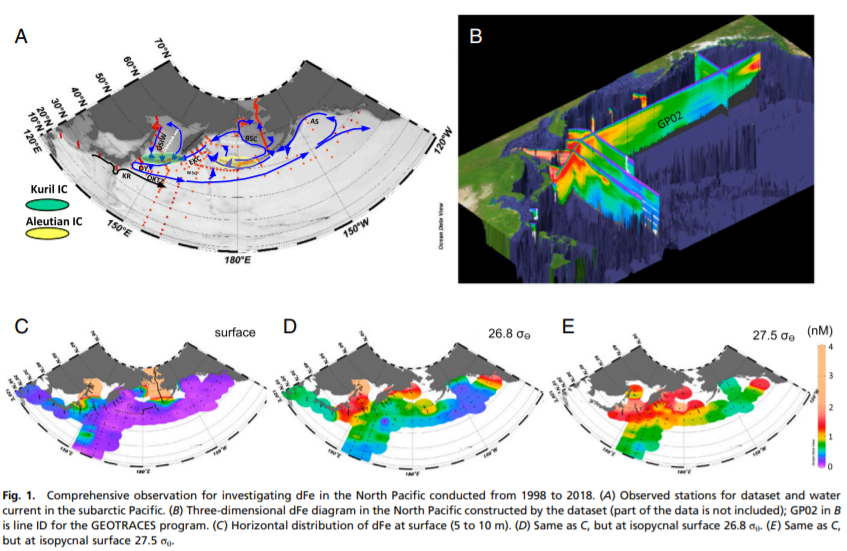 A study by Hokkaido University, the University of Tokyo, and Nagasaki University has introduced a new way of thinking about the mechanisms of nutrient transfer from deep-sea water in the northwest subarctic Pacific, and has confirmed the importance of iron from the Okhotsk Sea in supporting the growth of phytoplankton.

The western subarctic Pacific Ocean, including the Bering Sea – with the largest salmon catches in the world – is so productive because it has lots of phytoplankton, the base of the ocean food chain. Phytoplankton are free-floating, photosynthetic microorganisms that grow in lakes, streams, and oceans. They include algae, cyanobacteria, protists, and diatoms. The phytoplankton in turn require nutrients such as nitrate, phosphate, and silicate that are lifted from the deep ocean, as well as iron.

The research article (Jun Nishioka et al., Subpolar marginal seas fuel the North Pacific through the intermediate water at the termination of the global ocean circulation, PNAS, 27 May, 2020) helps explain why the western subarctic Pacific Ocean, which accounts for only 6 percent of the world’s ocean surface area, produces an estimated 26 percent of the world’s marine resources.

“Marginal seas” in this case means the Bering Sea and the Sea of Okhotsk, which lie at the margins of the subpolar North Pacific, separated from the main body of the Pacific by the Aleutian and Kuril Island chains, respectively.

“Intermediate water” refers to the middle layer of water. Ocean water tends to become stratified into surface, intermediate, and deep layers because temperature, salinity, and mineral content affect the density of the water. Cold, mineral-rich water sinks and tends to stay at the bottom, while warm water devoid of minerals tends to rise. The lack of nutrients, and iron, near the surface limits phytoplankton growth. Intermediate water lies between the surface and deep layers and mixes to a certain degree with the surface.

The “global ocean circulation,” also called the “ocean conveyor belt,” is a constantly-moving system of deep-ocean circulation driven by temperature and salinity. Cold, salty nutrient-rich water sinks in the North Atlantic and moves south as warm surface water takes its place, then it runs east along the Antarctic until it branches off to the Indian Ocean and the North Pacific where it ends with an upwelling that brings the nutrients back to the surface.