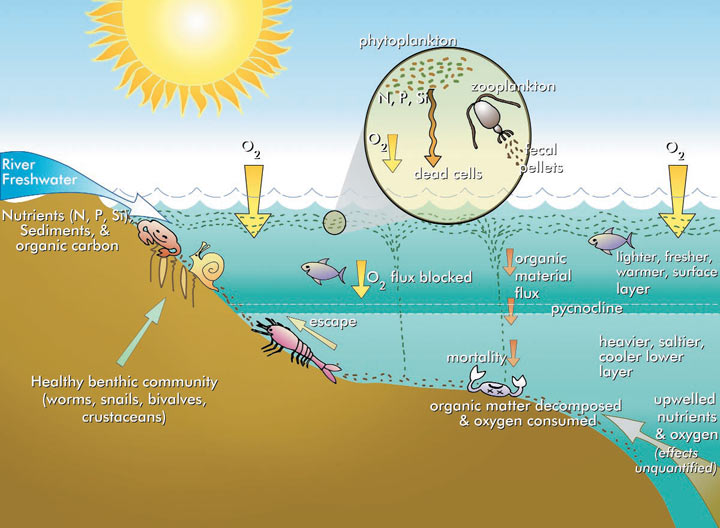 Scientists have found a new and better way to use remote sensing to understand where coastal dead zones are and predict changes.

A dead zone in the ocean is as bad as it sounds. Being clueless about dead zones scope and path is worse. Scientists at Michigan State University (MSU) have discovered a birds-eye method to predict where, when and how long dead zones persist across large coastal regions.

"Understanding where these dead zones are and how they may change over time is the first crucial step to mitigating these critical problems. But it is not easy by using traditional methods, especially for large-scale monitoring efforts," said Yingjie Li, who did the work while a PhD student at MSU's Center for System Integration and Sustainability (CSIS). He currently is a postdoctoral researcher at Stanford University.Dead zones -- technically known as hypoxia -- are water bodies degraded to the point where aquatic life cannot survive because of low oxygen levels. They're a problem mainly in coastal areas where fertilizer runoff feeds algae blooms, which then die, sink to the water's bottom and decay. That decay eats up oxygen dissolved in the water, suffocating living life, such as fish and other organisms that make up vibrant living waters.

Dead zones can be hard to identify and track and usually have been observed by water samples. But as reported in Remote Sensing of the Environment, scientists have figure out a novel way to use satellite views to understand what's happening deep below the ocean's surface. They used the Gulf of Mexico at the mouth of the Mississippi River as a demonstration site.

Is there a technological solution to aquatic dead zones? Source: Carnegie Institution for Science
_________

The group supplemented data from water sampling with different ways to use satellite views over time. In addition to predicting the size of hypoxic zones, the study provides additional information on where, when, and how long hypoxic zones persist with greater details and enables modeling hypoxic zones at near-real-time.

Since 1995, at least 500 coastal dead zones have been reported near coasts covering a combined area larger than the United Kingdom, endangering fisheries, recreation and the overall health of the seas. Climate change is likely to exacerbate hypoxia.

The group notes the need to initiate a global coast observatory network to synthesize and share data for better understanding, predicting and communicating the changing coasts. Currently, such data is difficulty to come by. And the stakes are higher as fertilizer applied in a field can become run off in one part of a body of water miles away. The group points out the telecoupling framework, which enables understanding human and natural interactions near and far, would be useful to see the big picture of a problem.

"Damages to our coastal waters are a telecoupling problem that spans far beyond the dead zones -- distant places that apply excessive fertilizers for food production and even more distant places that demand food. Thus, it's critical we take a holistic view while employing new methods to gain a true understanding," said Jianguo "Jack" Liu, MSU Rachel Carson Chair in Sustainability and CSIS director.

Besides, Li and Liu, "Satellite prediction of coastal hypoxia in the northern Gulf of Mexico" was written by Drs. Samuel Robinson and Lan Nguyen from the University of Calgary. The work was funded by the National Science Foundation and the Environmental Science and Policy Summer Research Fellowship.

Materials provided by Michigan State University. Note: Content may be edited for style and length.