International
Cargo ships anchored in the Pacific Ocean off the Port of Long Beach and Port of Los Angeles in Signal Hill, California, U.S., on Friday, Nov. 20, 2020. October was another record month for dockworkers at the West Coast port of Long Beach as more than 800,000 cargo containers were processed, a first in the terminals 109-year history. Photographer: Bing Guan/Bloomberg 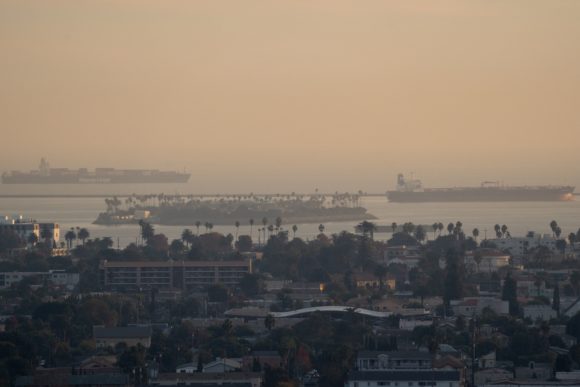 Terence Tsai started hearing about the growing labor crisis in shipping in a roundabout way. First, in March, an official at a ship management company in Hong Kong let slip that a captain had purposefully diverted a vessel under its control into the middle of the ocean to protest the treatment of himself and his crew.

Then, from the head of a large Asian shipping company, Tsai heard about a captain who wanted to attend his son’s funeral in Eastern Europe. It took more than two months and a mountain of paperwork to surmount Covid-era port restrictions and travel complications to get him on a flight back home.

As the stories started piling up, Tsai, a shipping industry analyst at London-based Fidelity International, began to realize he was getting to see one of the most hidden horrors of the pandemic: How cargo ships turned almost overnight from the engines of global commerce into floating prisons. There are hundreds of thousands of seafarers long overdue for relief, a situation the United Nations has designated a humanitarian crisis and one with consequences, Tsai realized, far beyond the shipping industry.

“There are hardly any shipping analysts out there to shine a light on this issue, as you would have on child labor in the consumer industries or deforestation, or carbon,” the 34-year-old Tsai said. “In the end, if I knew about this issue and didn’t raise it, then what’s the point of having a shipping analyst?”

Tsai realized that the plight of the stranded seafarers had major implications for global trade and the health and safety of marine workers. He shared his findings with some Fidelity fund managers and also the firm’s ESG team led by Jenn-Hui Tan, setting in motion a campaign to push portfolio companies to resolve the seafarer crisis.

Fidelity International, which oversees about $610 billion and is independent from Boston-based Fidelity Investments, wrote last year to more than 30 companies in the shipping and charter industries, asking them to address the problem. The firm was a lone voice among investors pressing the issue until it gathered a coalition of peers managing more than $2 trillion of assets that recently sent a letter to the UN, calling for action.