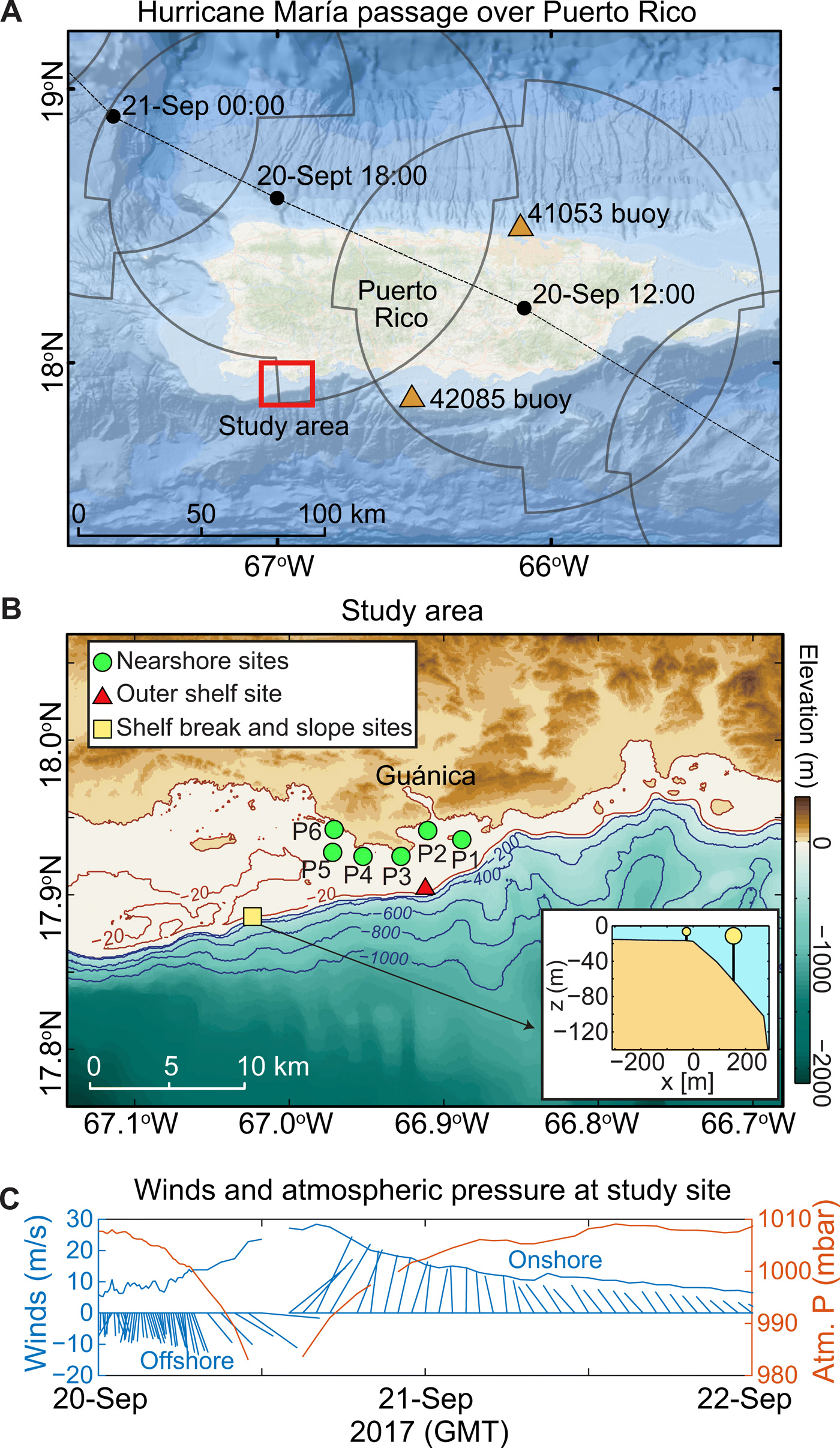 Hurricanes are extreme storms that affect coastal communities, but the linkages between hurricane forcing and ocean dynamics remain poorly understood

Hurricanes are extreme storms that affect coastal communities, but the linkages between hurricane forcing and ocean dynamics remain poorly understood. Here, we present full water column observations at unprecedented resolution from the southwest Puerto Rico insular shelf and slope during Hurricane María, representing a rare set of high-frequency, subsurface, oceanographic observations collected along an island margin during a hurricane. The shelf geometry and orientation relative to the storm acted to stabilize and strengthen stratification. This maintained elevated sea-surface temperatures (SSTs) throughout the storm and led to an estimated 65% greater potential hurricane intensity contribution at this site before eye passage. Coastal cooling did not occur until 11 hours after the eye passage. Our findings present a new framework for how hurricane interaction with insular island margins may generate baroclinic processes that maintain elevated SSTs, thus potentially providing increased energy for the storm.

Tropical cyclones (TCs), also known as typhoons and hurricanes, are extreme storms that can produce destructive winds, high storm surges, torrential rains, and flooding. When TCs affect populated coastlines, the result is usually tremendous damage to property and loss of life, making them one of the most feared and destructive weather systems on Earth. While TC intensity forecasts have improved over the past few decades (1), improvements in the 24- to 48-hour warning window have lagged, and the prediction skill for TC rapid intensification (RI) is still poor (2, 3). Accurate forecasts of RI or deintensification for landfalling TCs remain a critical challenge but are imperative for protecting coastal communities (4).

The ocean response can exert strong feedbacks in TC forcing because sea-surface temperatures (SSTs) are a primary factor controlling the energy available to TCs (5–7). Strong wind and large waves can act to entrain cooler waters from depth, driving a decrease in SSTs under TCs, with the magnitude of this cooling dependent on mixed layer depth and vertical stratification (8–11). This can result in a negative feedback, whereby cooler SSTs decrease the enthalpy flux from the ocean to the atmosphere, resulting in reduced storm intensity. However, observed SST cooling does not increase monotonically with increasing TC intensity (12), and there is evidence that in coastal waters over narrow continental shelves upper-ocean cooling can be negligible (13).

In proximity to coastal boundaries, the ocean response to TC forcing is not well understood due to both a paucity of in situ observations and models lacking sufficient resolution and complexity. The few full water column observations of TC-forced ocean dynamics along coasts predominantly come from broad continental shelves, such as the Mid-Atlantic Bight (14–16) or the Gulf of Mexico (17–19). Along broad shelves, the interaction of TC winds and coastal stratification with a land barrier can either increase SST cooling through strong shear- and bottom-friction induced mixing (14, 15, 17, 18) or limit SST cooling through downwelling (16, 20, 21). However, it is unclear if these dynamics translate to the steep, narrow, insular shelves of islands, which are disproportionately affected by TC storms. The few direct in situ measurements taken along steep island margins during TC conditions reveal several post-eye coastal dynamics: the alongshore advection of TC-upwelled waters (22), wind-driven cooling over shallow reef flats (22), as well as strong near- and subinertial baroclinic responses, such as coastally trapped waves (23). These previous observations report on coastal island dynamics driven by alongshore TC winds. To our knowledge, this is the first set of observations from an insular shelf to report dynamics (i) at these fine temporal (subminute) and vertical (<5 m) scales and (ii) driven by cross-shore TC winds.

Hurricane María, the strongest weather system to affect Puerto Rico since 1928, caused thousands of deaths (24), more than $90 billion in damage (25), and the largest electrical blackout in U.S. history (26). During María, an array of oceanographic sensors were deployed off the southwest coast of Puerto Rico as part of a months-long experiment to investigate wave and circulation dynamics on the southern insular shelf and steep upper slope (Fig. 1). Here, the insular shelf extends 5 to 10 km offshore to the shelf break at ~20-m depth, below which the upper slope (20- to 90-m depths) ranges from 25° to 45°, with a gradient of approximately 44° at our slope site (27). The array included nearshore pressure sensors, an outer shelf waves and current profiler, an upper slope current profiler, and thermistor moorings at the shelf break and upper slope (see Materials and Methods). The resulting dataset provides a unique opportunity to examine the hydrodynamics and baroclinic processes under TC forcing at an unprecedented temporal and vertical scale and also represents one of the first full water column observations of TC-driven coastal processes over a steep island margin.