International
Manganese nodules on the seafloor in the Clarion-Clipperton Zone, between Hawaii and Mexico, captured on camera by a remote vehicle in 2015. ROV KIEL 6000, GEOMAR, CC BY 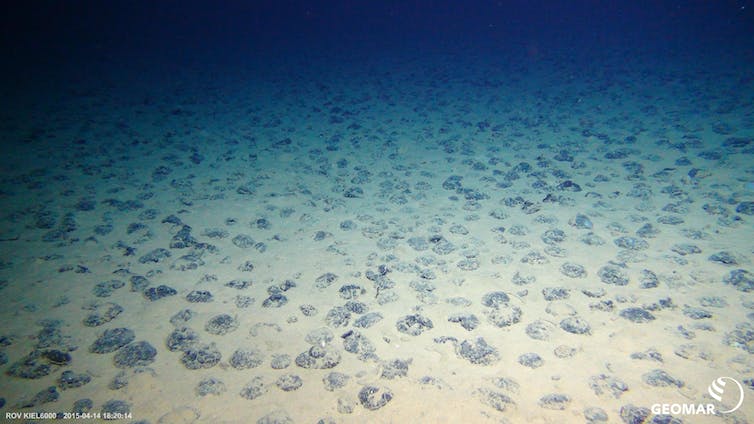 As companies race to expand renewable energy and the batteries to store it, finding sufficient amounts of rare earth metals to build the technology is no easy feat. That’s leading mining companies to take a closer look at a largely unexplored frontier – the deep ocean seabed.

A wealth of these metals can be found in manganese nodules that look like cobblestones scattered across wide areas of deep ocean seabed. But the fragile ecosystems deep in the oceans are little understood, and the mining codes to sustainably mine these areas are in their infancy.

A fierce debate is now playing out as a Canadian company makes plans to launch the first commercial deep sea mining operation in the Pacific Ocean.

The Metals Company completed an exploratory project in the Pacific Ocean in fall 2022. Under a treaty governing the deep sea floor, the international agency overseeing these areas could be forced to approve provisional mining there as soon as spring 2023, but several countries and companies are urging a delay until more research can be done. France and New Zealand have called for a ban on deep sea mining.

As scholars who have long focused on the economic, politicaland legal challenges posed by deep seabed mining, we have each studied and written on this economic frontier with concern for the regulatory and ecological challenges it poses.

What’s down there, and why should we care?

A curious journey began in the summer of 1974. Sailing from Long Beach, California, a revolutionary ship funded by eccentric billionaire Howard Hughes set course for the Pacific to open a new frontier — deep seabed mining.

Widespread media coverage of the expedition helped to focus the attention of businesses and policymakers on the promise of deep seabed mining, which is notable given that the expedition was actually an elaborate cover for a CIA operation.

The real target was a Soviet ballistic missile submarine that had sunk in 1968 with all hands and what was believed to be a treasure trove of Soviet state secrets and tech onboard.

The expedition, called Project Azorian by the CIA, recovered at least part of the submarine – and it also brought up several manganese nodules from the seafloor.

Manganese nodules are roughly the size of potatoes and can be found across vast areas of seafloor in parts of the Pacific and Indian oceans and deep abyssal plains in the Atlantic. They are valuable because they are exceptionally rich in 37 metals, including nickel, cobalt and copper, which are essential for most large batteries and several renewable energy technologies.

These nodules form over millennia as metals nucleate around shells or broken nodules. The Clarion-Clipperton Zone, between Mexico and Hawaii in the Pacific Ocean, where the mining test took place, has been estimated to have over 21 billion metric tons of nodules that could provide twice as much nickel and three times more cobalt than all the reserves on land.

Mining in the Clarion-Clipperton Zone could be some 10 times richer than comparable mineral deposits on land. All told, estimates place the value of this new industry at some US$30 billion annually by 2030. It could be instrumental in feeding the surging global demand for cobalt that lies at the heart of lithium-ion batteries.

Yet, as several scientists have noted, we still know more about the surface of the moon than what lies at the bottom of the deep seabed.

Less than 10% of the deep seabed has been mapped thoroughly enough to understand even the basic features of the structure and contents of the ocean floor, let alone the life and ecosystems therein.

Even the most thoroughly studied region, the Clarion-Clipperton Zone, is still best characterized by the persistent novelty of what is found there.

Between 70% and 90% of living things collected in the Clarion-Clipperton Zone have never been seen before, leaving scientists to speculate about what percentage of all living species in the region has never been seen or collected. Exploratory expeditions regularly return with images or samples of creatures that would richly animate science fiction stories, like a 6-foot-long bioluminescent shark.