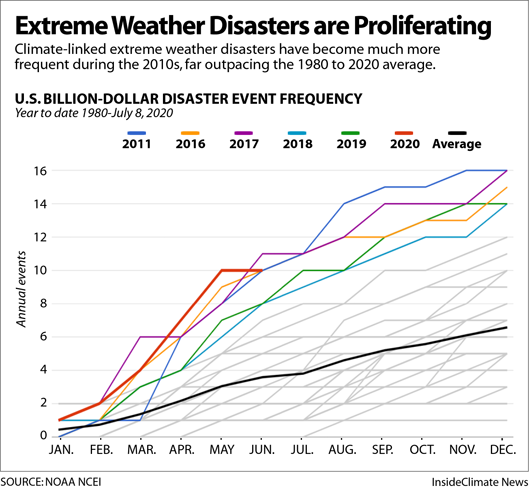 A new report looks at the price of climate-linked natural disasters and how global warming is making them worse.

Lisa Paul was still recovering from the wildfire trauma of 2017 when she experienced a renewed wave of sickening dread last week, the skies above her home and vineyard in the mountains east of Sonoma, California, filled with lightning that sparked hundreds of wildfires.

"I had pretty close to a panic attack when the Hennessy Fire, near Lake Berryessa, exploded into almost a mushroom cloud," she said, adding that she could see the blaze just over the hills, "where the 2017 fires crested."

The Wine Country fires of two years ago were fanned by a diablo wind that pushed the flames directly toward her property, destroying gardens, orchards and vineyards.

Those fires killed 22 people and damaged or destroyed more than 5,600 structures, burning across about 56 square miles. Property damage totaled $14.5 billion. Firefighting costs were estimated at $1.5 billion.

One year later, the $16.5 billion Camp Fire burned across 240 square miles and incinerated the town of Paradise in Butte County, California, about 180 miles northeast of Sonoma, killing 85 people and destroying or damaging more than 18,000 buildings.

The cost of this year's fires—the first of which have so far burned their way across more than 1,400 square miles, destroyed hundreds of structures and are still not close to being contained—can't even be guessed at. Fire season is just beginning. And global warming is going to make it worse, according to a new analysis commissioned by the nonprofit advocacy organization Environmental Defense Fund that looks at the cost of climate-linked natural disasters.The report details how the financial impacts of fires, tropical storms, floods, droughts and crop freezes have quadrupled since 1980.

"It shows what happens if we don't do anything about global warming," said EDF's Elgie Holstein. "There's no denying the trends and the fact this all becomes more expensive going forward."