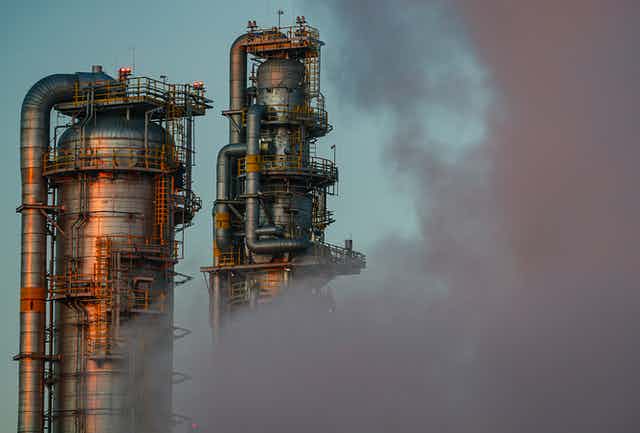 Visiting a modern petrochemical plant makes you feel incredibly small. Enormous compressors roar incessantly, distillation columns tower high above your head, large pipelines full of oil and gas criss-cross the site. Heat radiates from inspection hatches in the furnaces in which the hydrocarbons are heated to 850°C to make the molecules crack. It’s easy to get lost in alleys of ducts and pipes, which to an untrained eye, all look the same.

Large tankers moor at the quay to unload cargoes of oil and gas and trucks leave at the other end, filled with plastic pellets. Tall chimneys release large plumes of flue gases from burning gas and unwanted by-products, using the energy to run the processes at the plant. At night a flare watches over the plant like a bright eye. This is where gases are combusted in case of an emergency or unexpected shutdown of parts of the plant. It’s always burning with a small flame.

Around the world, around the clock, the plastics we use every day are produced at facilities such as these on an almost incomprehensible scale. A scale so large that some suggest we now live in an era best labelled the plasticene.

And as the climate crisis worsens, plastics production at plants like these is ballooning. Modern lifestyles and practices are intimately entwined with the use of plastics. Our phones, computers, food packaging, clothes and even renewable energy technologies, such as wind turbine blades and the cables that connect them to the power grid, are all, to a large extent, made from plastics.

This means plastic demand is likely to grow for decades to come – not least in developing countries, which will account for the bulk of future demand growth. In 1950, the global production of plastic was estimated to be a mere 2 Mt (million tonnes). In 2015 this had grown to 380 Mt, and along a business-as-usual trajectory it will reach 1,606 Mt by 2050.

Unless mitigated, this growth will also incur a substantial increasein global greenhouse gas emissions – from 1.7 Gt (billion tonnes) of CO₂-equivalent (CO₂e) in 2015, to 6.5  GtCO₂e by 2050. It has been forecast that plastics and other petrochemicals, such as fertilisers and solvents (plastics make up close to 45% of the output of the sector) will become the largest driver of oil demand, accounting for almost 50% of the growth in oil demand by 2050, according to estimates by the International Energy Agency (IEA).

Why? Because the raw materials behind plastics and other petrochemicals are fossil fuels. As traditional demands for oil – vehicle fuels – are declining as the transport sector is increasingly electrified, the oil industry is seeing plastics as a key output that can make up for losses in other markets. Investing in plastics has therefore become a key strategy for fossil fuel firms.

More recently, we investigated major plastics producers and the investments they are making which are likely to increase the production of fossil-based virgin plastics around the world. We discovered that the 12 largest petrochemical companies have cumulatively announced 88 new projects for production capacity increase and infrastructure expansion between 2012 and 2019. This is indicative of a global trend of increasing investments in the chemical industry, with available data for key regionsshowing that total investments more than doubled from 2007 to 2019, reaching levels we estimate have not been seen before.

These new and expanded facilities will operate for decades once they are opened, adding to the current greenhouse gas emissions of the chemical industry – which are already the third largest of all industries.

Petrochemical plants of the future

On the small island of Yushan outside Zhoushan, a coastal city in the eastern Chinese province of Zhejiang, one such new mega-plant is currently being built. The mountain peaks on the island have been flattened and the island itself has been expanded into the sea by so much that on satellite images available on Google maps you can no longer recognise its shape. All of this to make way for a gigantic industrial site: Zhejiang Petrochemical Company’s somewhat perversely named Green Petrochemical Base.

The brand new site, which is in the final stage of its second development phase, is a fully integrated petroleum refinery and petrochemical production facility. Previously, these processes have typically been located in separate facilities and sometimes on different continents. The new facility will have the capacity to process 800,000 barrels of crude oil per day (enough to fill 50 Olympic-size swimming pools) making it one of the largest refineries in the world. Most of its chemical products will be common plastics, such as polyethylene for flexible packaging and key petrochemical building block molecules for the production of polyester fibres for textiles.

The Zhejiang project is indicative of a trend as oil and gas companies increasingly look to plastics and other petrochemicals as progressively important markets for their product. “The future of oil is in chemicals, not fuels,” as a headline in a trade press journal describes it. Our investigations indicate that this future is fast approaching.

Information about the industry and its growth is scarce in international statistical databases, such as those hosted by the UN Industrial Development Organisation, and only extremely aggregated data is available from trade organisations. So we spent the last year collecting data about recent projects from trade press as well as information released by the firms themselves, cross-referencing to identify unique projects. Two key trends emerged in our analysis: the move towards primarily using oil for plastics and chemicals rather than petrol, and the explosive growth in demand for US ethane, a byproduct from shale gas produced through fracking.

The first trend is most manifest in China and the Asia-Pacific region, where industry experts estimate that 70-80% of new refining capacity in the next five years will be plastics focused. The large oil firms are therefore strategically partnering with chemicals and plastics producers in the region – in the Zhejiang case described above, for example, Saudi Aramco has signed an agreement to buy shares in the firm and become a main supplier of crude oil.

The almost insatiable demand for plastics in the Chinese manufacturing industry – producing plastic car parts, cell phones, and textiles for use both domestically and abroad – has also spurred Western chemical firms to make record investments. The world’s largest chemicals company BASF, for example, is investing US$10 billion in a new site in China – the largest investment ever for the company.

The second trend has mainly materialised along the coast of the Gulf of Mexico, from Corpus Christi and Houston (the petrochemical capital of the world) in Texas to Baton Rouge and New Orleans in Louisiana. The expansion of fracking in the US has created a plentiful supply of ethane, a by-product of fracking for oil and natural gas. While ethane cannot be used as natural gas in most applications, it is an excellent feedstock for the production of common plastics – and is very cheap. As ethane production in the US has soared following the shale gas boom, so have the investments in ethane-based plastics production facilities as well as other chemicals produced from shale gas.

With new technology being developed for exporting ethane overseas, this trend quickly diffused to Europe. Adding new export terminals in the US has also recently allowed the export to reach both India and China.

To understand the modern plastics and petrochemical industries of today, we must look to the past. The modern chemical industry (including plastics) has a long tradition of close connections to the fossil fuel industry. It goes all the way back to the mid 19th century when the first synthetic dyestuffs and other early industrial chemicals were produced from coal tars, abundantly available from the gas works in which coal was used to produce gas for use in the quickly growing cities.

The industry emerged and developed in regions with coal resources and rapid industrialisation, such as the UK. But it was in Germany, where chemistry was a strong academic tradition and collaboration with industrialists common, that key developments were made. This led to the foundation of successful companies such as Bayer (in 1863) and BASF (in 1865) – companies that are still among the top firms in the industry. Coal remained the main source of raw materials and energy for chemicals for a century, and also for the first synthetic plastics, such as Bakelite.

In the mid 20th century, it was clear that change was coming, but in the years following world war two the direction remained uncertain – in 1949, the economist Egon Glesinger of the Food and Agriculture Organization of the UN published his book The Coming Age of Wood, in which he forecast a chemicals industry that used wood to produce its products instead of coal.

Reading this book today, it is difficult to understand that it is 70 years old: the topic is close to today’s debate about how to mitigate climate change by using renewable resources. But in the 1950s, the industry sadly went a different way, as the breakthroughs US firms had made in petroleum processing during the war quickly spread around the globe with the help of re-industrialisation aid schemes such as the Marshall plan.

This led to the era of petrochemicals, with the industry recording double digit growth during the 1960s and 1970s. Since then, the industry has expanded into using natural gas, leading to the recent turn towards using gas condensates, such as ethane from fracking. For more than 150 years, the chemical and fossil fuel industries have fostered a particularly special relationship.

Plastics and other chemicals are today almost exclusively produced from oil and gas (and in China still coal to some degree). The largest companies producing plastics are often subsidiaries of international oil and gas companies, such as Shell (Netherlands/UK) and ExxonMobil (US), or of national oil companies, such as Sinopec (China) or SABIC (Saudi Arabia). Other firms in the industry have started by producing plastics and chemicals before acquiring oil and gas infrastructure, such as INEOS (UK) and Reliance (India).

The firms in the industry rely on licensing technologies developed by global technology suppliers, such as Honeywell, who see chemicals production as a cornerstone for developing the “refinery of the future” – further cementing the connection to fossil fuels.