International
The range of blue mussels has shrunk considerably as the ocean has warmed and changed how their larvae are dispersed by currents. Andrew J. Martinez / Science Source 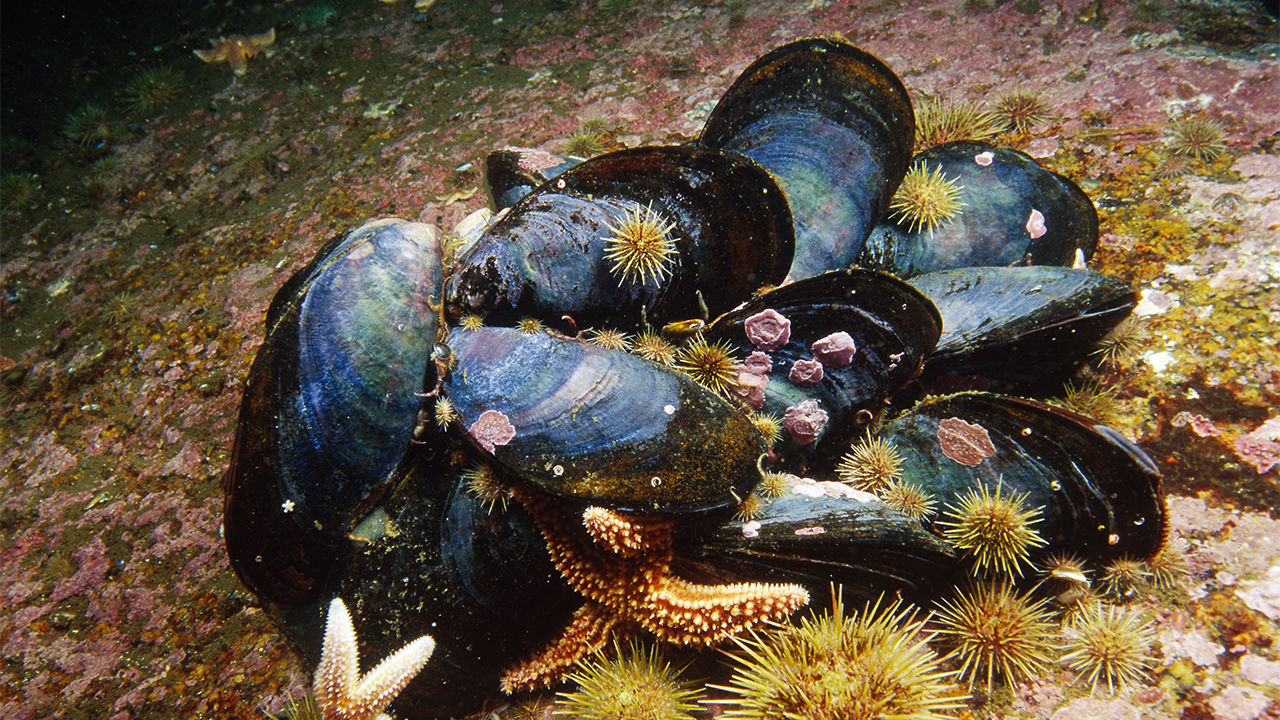 As the world warms, many species of plant and animal will have to find new—often cooler—places to live.

But things are trickier for sedentary marine creatures like snails, worms, and clams, according to a new study. It finds that in the Northwest Atlantic Ocean, many species are spawning earlier in the year, when currents take their larvae southward and into warmer waters—the wrong direction. For some of them, including the sand dollars beloved by beachcombers, this means their range is shrinking.

Earlier spawning is a serious threat. "For species that can't move effectively, it's going to enhance the likelihood that they're going to get really rare and potentially be driven extinct by climate change," says Steve Gaines, a marine ecologist at the University of California, Santa Barbara, who was not involved in the research. A key question, he says, is whether these species will likely evolve to spawn later or tolerate warmer water. And if they don’t, should biologists try transplanting them to more suitable environments?

Many biologists have assumed marine species can shift habitat fairly easily if their environment changes, but the new study shows things are more complicated for species distributed only via drifting larvae. "The big take-home message is, you can't just assume critters will spread to wherever the climate is congenial for them," adds James Pringle, a physical oceanographer at the University of New Hampshire, Durham, who was not involved with the new work.

This isn't the first study to find that some marine species are shifting their ranges into inhospitable habitats. But those findings have often been dismissed as “noise,” Gaines says. And there have been no explanations for the counterintuitive patterns, says Heidi Fuchs of Rutgers University, New Brunswick, who studies how marine snails—such as the threeline mud snail—spawn and how their larvae drift in currents along the Northwest Atlantic continental shelf.

A few years ago, Fuchs noticed the range of a snail species had shrunk significantly over the decades, and another had disappeared from the outer part of the shelf. Digging up data for other bottom-dwelling marine invertebrates—known as benthic organisms—she found a similar, odd pattern among many species in the same area: Some of these cooler-water species were moving south, but overall their range was contracting because they were also moving from deeper to shallower water. Their new habitats tended to be warmer—and perhaps hazardously hot. "It was pretty clear that they were going in the wrong direction," Fuchs says.

Brad Rich / Carolina Coast Online
West Coast
Marbled murrelets are seabirds that nest in mature conifer forests along the Pacific Coast. They are in trouble in Oregon, Washington and California. via Oregon State University