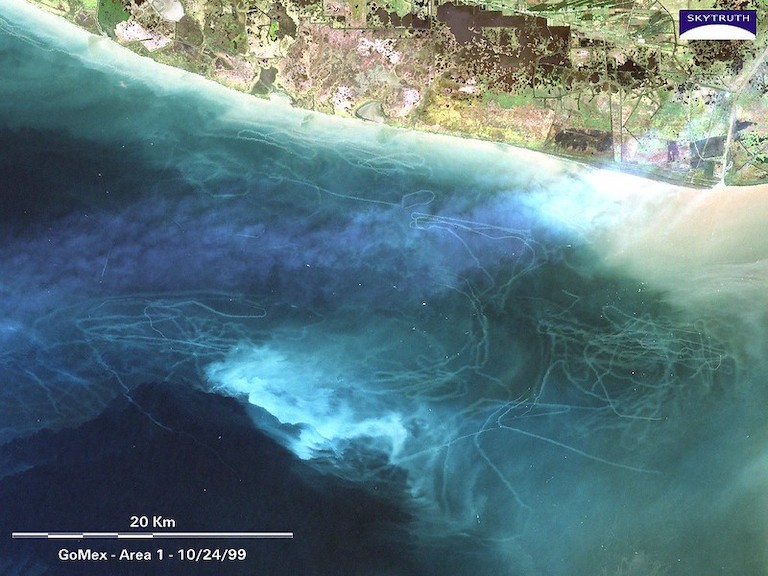 From the eye of a satellite, the ocean is streaked with smoky white lines that flow and twist like scribbled handwriting across the surface. But these lines aren’t naturally occurring features — they’re sediment plumes from large trawling vessels that scrape the seafloor with nets and heavy equipment, trying to catch bottom-dwelling species like shrimp and whiting.

The environmental consequences of trawling are still being investigated since the plumes were first noticed in satellite imagery in 2008. But a new study in Naturesuggests that it churns up and releases carbon that’s been locked up inside sediment at the bottom of the ocean — between about 600 million and 1,500 million tons, according to the study’s initial estimates, which is about the same amount as the global aviation industry.

“It had been thought before that there’s more carbon stored in soils than there is in sediment in the ocean,” Boris Worm, co-author of the paper and professor of marine conservation biology at Dalhousie University in Canada, told Mongabay in an interview. “But we found that the ocean was qualitatively more important. So then it becomes an important question of whether that carbon is safe, or whether there is a danger that it gets reintroduced into the environment.”

The paper, which was spearheaded by Enric Sala of National Geographic and the Pristine Seas project, not only points out the issue of trawling emitting carbon — it also offers a solution, or rather, a range of solutions. It suggests that by meticulously choosing places in the global ocean to set up as marine protected areas (MPAs), nations can not only reduce carbon emissions, but also safeguard marine biodiversity and maintain fishing efforts.