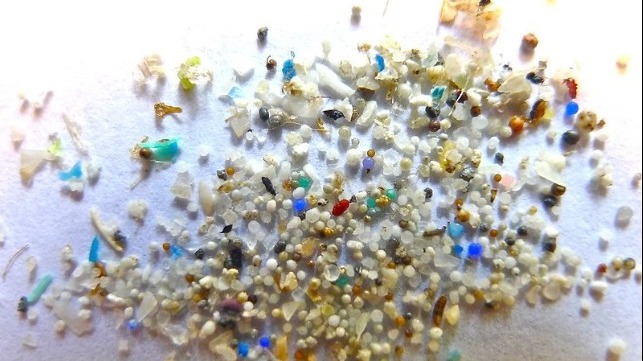 World - Ocean Microplastic Pollution Can Now Be Tracked By Satellite

Plastic is the most common type of debris floating in the world’s oceans. Waves and sunlight break much of it down into smaller particles called microplastics – fragments less than five millimeters across, roughly the size of a sesame seed.

To understand how microplastic pollution is affecting the ocean, scientists need to know how much is there and where it is accumulating. Most data on microplastic concentrations comes from commercial and research ships that tow plankton nets – long, cone-shaped nets with very fine mesh designed for collecting marine microorganisms.

But net trawling can sample only small areas and may be underestimating true plastic concentrations. Except in the North Atlantic and North Pacific gyres – large zones where ocean currents rotate, collecting floating debris – scientists have done very little sampling for microplastics. And there is scant information about how these particles’ concentrations vary over time.

To address these questions, University of Michigan research assistant Madeline Evans and I developed a new way to detect microplastic concentrations from space using NASA’s Cyclone Global Navigation Satellite System. CYGNSS is a network of eight microsatellites that was launched in 2016 to help scientists predict hurricanes by analyzing tropical wind speeds. They measure how wind roughens the ocean’s surface – an indicator that we realized could also be used to detect and track large quantities of microplastics.

Annual global production of plastic has increased every year since the 1950s, reaching 359 million metric tons in 2018. Much of it ends up in open, uncontrolled landfills, where it can wash into river drainage zones and ultimately into the world’s oceans.

Researchers first documented plastic debris in the oceans in the 1970s. Today, it accounts for an estimated 80 to 85 percent of marine litter.

The radars on CYGNSS satellites are designed to measure winds over the ocean indirectly by measuring how they roughen the water’s surface. We knew that when there is a lot of material floating in the water, winds don’t roughen it as much. So we tried computing how much smoother measurements indicated the surface was than it should have been if winds of the same speed were blowing across clear water.