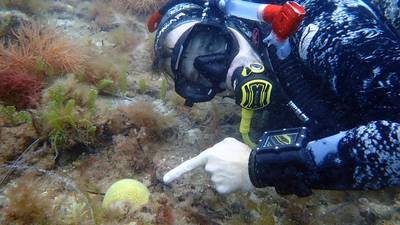 With about one-third of the world’s corals currently under threat of extinction due to climate change, Curtin researchers have made the encouraging discovery of a ‘lost’ species of coral that had been hidden for more than 50 years.

Lead author PhD student David Juszkiewicz, from the Coral Conservation and Research Group within the Trace and Environmental DNA (TrEnD) Laboratory in Curtin’s School of Molecular and Life Sciences, said researchers found the coral Plesiastrea versipora, which is widespread in the Indo-Pacific Ocean, was actually hiding a second, cryptic species.

“The species Plesiastrea peroni was described some 200 years ago however as time went on taxonomists clumped it with Plesiastrea versipora but we have now resurrected the former species, which had been hidden for more half a century,” Juszkiewicz said.

“We trawled through 200 years of historical and modern-day literature to firstly understand the larger morphological characteristics of Plesiastrea versipora, which was first described as a single species in 1816.

“By diving on various sites around Australia and the Indo-Pacific, we collected samples, which we used to study the micromorphology and microstructure of the coral skeleton to further identify its unique intricate features.

“After carrying out genetic sequencing, we found this species of coral actually contained a second, cryptic species, which we named Plesiastrea peroni – and this is found north of the Tropic of Capricorn in Australia and across the Indo-Pacific.