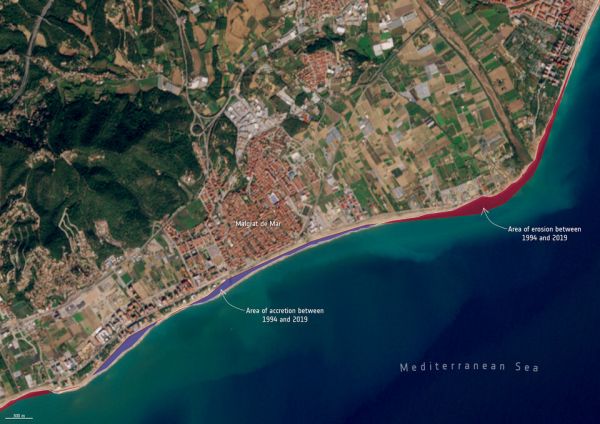 Climate change is having an undeniable influence on coastal areas. A substantial proportion of the world’s sandy coastlines are already eroding owing to increased storm surges, flooding and sea-level rise. With our coastal environments undergoing constant change, Earth observation satellites are being used to better strengthen our knowledge of changing coastlines.

For decades, coastal areas have been subject to intense urbanization and population growth. The European Union coastline is approximately 68,000km long, more than three times longer than that of the United States. According to the European Environment Agency, almost half of the EU population lives less than 50km from the sea, with the seaside being Europe’s most popular holiday destination.

Understanding the Evolution of Coastal Environments

Coastal erosion is currently observed on many shorelines in Europe and will most likely worsen with rising sea levels. Monitoring coastal movement is key in understanding the evolution of coastal environments and these data can provide fundamental information to regional decision makers.

ESA has been developing an array of products to address these challenges. As part of ESA’s EO Science for Society programme, the Coastal Change from Space project is providing important insights into global coastal changes. Using 25 years of satellite imagery, including data from the Copernicus Sentinel-1 and Sentinel-2 missions, the team has mapped 2,800km of coastline analysed across four nations: the United Kingdom, Ireland, Spain and Canada.

Improved Accuracy on the Ground

As part of this project, a special process has been developed and applied to ensure that each pixel from every image has a greatly improved accuracy on the ground, as well as to identify where the coastline is precisely located on a specific date.

The frequent revisit rate of the Sentinel-1 and Sentinel-2 missions has enabled the changes to be observed as well as more permanent and extreme movements due to storm events. These results were then validated by a team of independent scientists from the four nations using results from field observations and local knowledge.