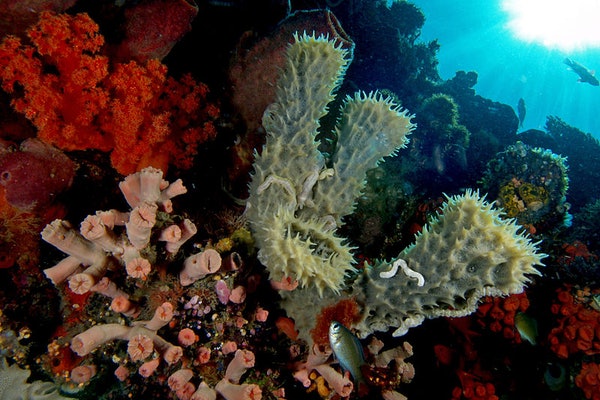 There are many threats to tropical coral reefs. For example, in addition to climate change, corals are susceptible to being smothered by sedimentation, and fishes are being extracted faster than they can reproduce. But these are not the only types of life on a reef.

Marine sponges, which are typically overlooked by recreational divers attracted to the colorful and active fish and to the corals that form massive bioengineered structures, play a key role in coral reef ecosystems through nutrient cycling. A paper recently published in the ISME Journal has determined the mechanism by which marine sponges consume and digest dissolved organic matter, or DOM.

Just as dust in your home comes in part from dead skin, DOM  (sometimes called “marine snow”) is bits of carbon sloughed off of various ocean-dwelling organisms. Sponges filter these particles out of the water, using it as one of their main food sources while cleaning the water for more sensitive organisms like coral.

The predominant opinion used to be that DOM processing is performed by bacteria acting as symbionts, but this study found it also occurs in the cells of the sponge itself, with ratio of sponge versus symbiont processing varying across species and environments. This strategy of recycling has allowed sponges to exist for over 600 million years without large changes in their approach to life.