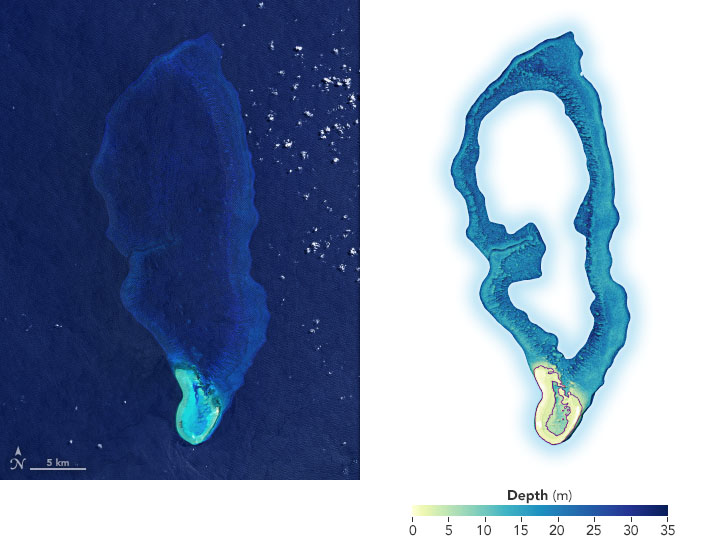 The waters along the world’s coasts and islands are incredibly important to human activities, yet they are not always well mapped.

Coastal waters are often turbulent and murky, as the sand, mud, and sediment on the bottom is constantly in motion. Unless there are regularly dredged channels, it can be difficult and dangerous for ships to travel in shallow water. Making accurate and up-to-date depth charts is time-consuming and expensive, and doing so on a global scale is a monumental task.

By combining satellite measurements with ship-based sonar data, a team of researchers is now working to fill the gaps in our seafloor maps. They are using data from NASA’s Ice, Cloud, and land Elevation Satellite 2 (ICESat-2) to accurately measure the depths (bathymetry) of shallow coastal waters, where surveying ships have historically been unable to travel due to safety, expense, or remoteness.

The images above show Velasco Reef in the Republic of Palau. The left, natural-color image of the South Pacific reef was acquired by Landsat 8 in 2020; the right image is a digital elevation model created with ICESat-2 data. The map was developed as part of a demonstration study led by remote sensing scientists Lori Magruder of the University of Texas at Austin and Chris Parrish of Oregon State University. They partnered with the Coral Reef Research Foundation in Palau to fuse existing sonar data with their ICESat-2 dataset.

Mapping shallow, nearshore areas can be slow and potentially dangerous. Conventional field methods may involve a surveyor standing in shallow water, taking measurements at specific intervals, while at the mercy of waves and currents. Meanwhile, boat-based sonar surveys are inefficient in shallow waters and subject to the dangers of waves, rocks, and reefs. In addition, the National Oceanic and Atmospheric Administration (NOAA) has established Navigable Area Limit Lines (NALL), which define the shoreward limit of their boat-based surveys. The NALL is set at water depths of 3.5 meters (11 feet), and NOAA advises caution to captains maneuvering in shallow areas within the NALL because they are not often mapped, if at all. Sometimes the NALL limit can extend significant distances from shore.

These challenges result in many nearshore coastal waters being largely unmapped. The area is nicknamed “the white ribbon” because it appears as white space hugging coasts, shoals, and atolls on bathymetric maps. It essentially represents no data.