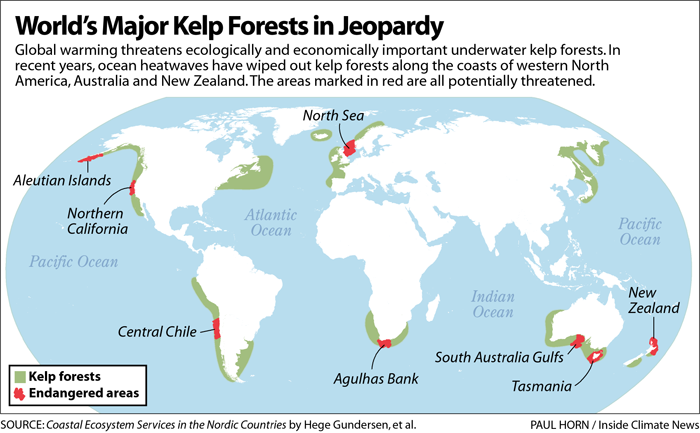 When ocean heat waves and a sea star disease devastated kelp forests that are critical to sea life and the California urchin fishing industry, sea otters came to the rescue.

Watching marine life, from otters to wetsuit-clad surfers, frolic in the famously cold water off the coast of Santa Cruz, it’s hard to imagine the devastation that warming water has wreaked just beneath the waves. In central and Northern California, a massive ocean heat wave in 2014 and 2015 set off a cascade of events that killed huge underwater kelp forests, in some areas replacing the dense algal jungles with “urchin barrens.”

The multi-species drama involves not only the kelp but sea urchins and sea stars, and a surprising hero—sea otters—maintaining some of the underwater forests. The work of the otters, and a handful of humans, may be the only hope for this crucial ecosystem to survive in warming waters.

The disintegration of Northern California kelp forests, which grow along rocky coastlines in cool, clear water up to 100 feet deep, is a case study of how global warming triggers cascading effects. Oceans have absorbed about 93 percent of the heat trapped by industrial greenhouse gas pollution. The warming fuels more frequent and stronger marine heat waves that are already devastating kelp and other ocean ecosystems around the world, disrupting coastal communities that rely on salmon, shellfish and other marine resources.

Grant Downie, a fisherman who works diving for urchins with his father in Fort Bragg, first noticed the change in 2014.

“We were on the boat and seeing areas where there should be kelp, and there’s just nothing,” Downie said. “And then doing dives, and the urchins aren’t any good. [My father] said ‘You know, I see something changing.”