International
Manganese nodules on the seabed off the southeastern U.S., 2019 (NOAA) 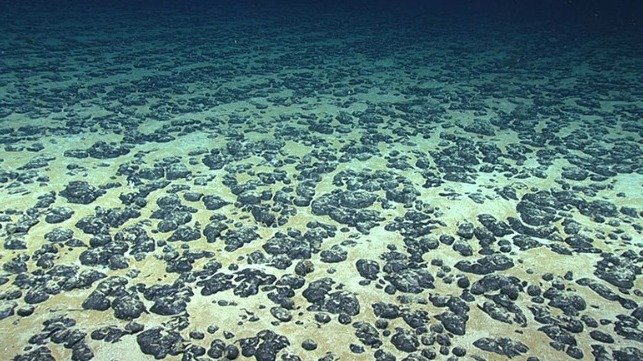 World - In the green energy race, deep-sea mining is gaining momentum, consequences could be devastating

Three miles deep along the floor of the abyssal plains of the global oceans, trillions of black, round, rock-like nuggets are scattered and amassed. These rocks, called Polymetallic Nodules, are similar in size and appearance to partially burned charcoal briquettes and are a mixture of nickel, cobalt, manganese, and other rare earth metals.

They are formed through a complex millions-of-years-long biochemical process in which shark teeth and fish bones are encased by minerals accreted out of ocean waters.

Why am I telling you this? These rocks just might have the answer for the growing clean energy transition.

A new World Bank Group report, “Minerals for Climate Action: “The Mineral Intensity of the Clean Energy Transition,” finds that the production of minerals, such as Graphite, Lithium, and Cobalt, could increase by nearly 500% by 2050, to meet the growing demand for clean energy technologies. The group estimates that over 3 billion tons of minerals and metals will be needed to deploy wind, solar and geothermal power and energy storage, required for achieving a below 2°C future.

Experts see no way back for NZ firm blocked from trying to mine the seabed  Mongabay.com

Deep seabed mining is risky. If something goes wrong, who will pay for it?  Mongabay.com

In other words, the clean energy transition will be mineral intensive, and the race to reach said metals has begun, encompassing resource-rich developing countries and private sector entities alike. The bottom of the sea, or Deep Sea mining, is yet another option that is now coming of age, with the nodules being only a fracture of the open possibilities that the ocean holds.

The deep sea is full of unknown minerals such as Larbium and Eurithuim, alongside Platinum, Silver, Gold, Nickel, Zinc, and more. Cobalt, a mineral in high demand used for rechargeable batteries in the renewable energy sphere, is a deep-sea star. An estimated 94,000 tons of the material are in the ocean bed, more than 6 times its current on-land reserves.