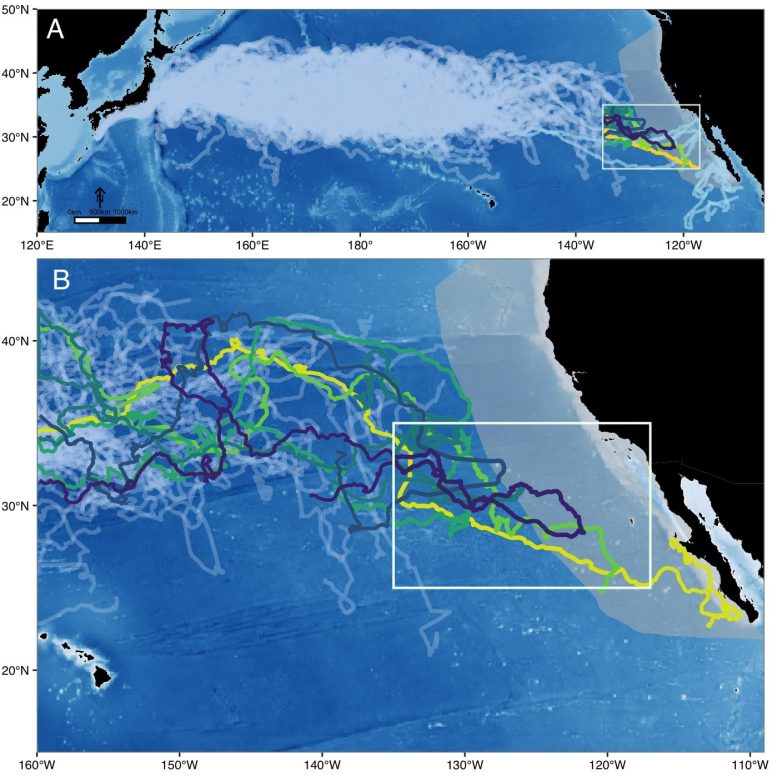 Known as “the lost years,” it is a little-understood journey that unfolds over thousands of miles and as much as two decades or more. Now, a Stanford-led study illuminates secrets of the North Pacific loggerhead turtles’ epic migration between their birthplace on the beaches of Japan and reemergence years later in foraging grounds off the coast of Baja California. The study, published April 8 in Frontiers in Marine Science, provides evidence for intermittent passages of warm water that allow sea turtles to cross otherwise inhospitably cold ocean barriers. The findings could help inform the design of conservation measures to protect sea turtles and other migratory sea creatures amid climatic changes that are altering their movements.

“For decades, our ability to connect the migratory dots for this endangered species has remained elusive,” said study lead author Dana Briscoe, who was a research associate at the Stanford Woods Institute for the Environment during the research and now works at the Cawthron Institute, New Zealand’s largest independent marine science organization. “This work builds on the backbone of exceptional research about these ‘lost years,’ and for the first time ever we are excited to provide evidence of a ‘thermal corridor’ to explain a longstanding mystery of one of the ocean’s greatest migrants.”

Wildlife seekers thrill to the sight of sea turtles, but ship traffic, fishing nets, and other perils have been less kind. The International Union for Conservation of Nature lists six of the seven sea turtle species as critically endangered, endangered, or vulnerable.

Despite scientific advancements in core habitat use, we still know precious little about the movement of turtles and other long-lived sea creatures between disparate locations. This knowledge gap makes it impossible to effectively assess and protect these species.

The researchers wanted to know how and why some loggerheads travel to the western coastline of North America while others remain in the central Pacific Ocean. How is it that some sea turtles – creatures highly sensitive to temperature – can cross a frigid zone called the Eastern Pacific Barrier between the two ocean regions that normally stops most creatures in their tracks?