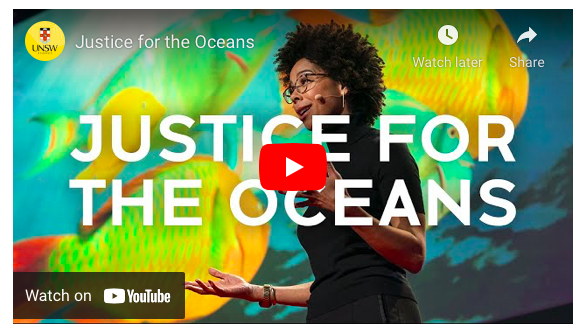 World - How a scientist made sure the oceans weren't forgotten

In a UNSW Science Week event, Dr Ayana Elizabeth Johnson said the key to fighting the climate crisis is saving the oceans.

US marine scientist and self-described policy nerd Dr Ayana Elizabeth Johnson remembers scrolling through the 2019 policy Green New Deal and being stunned to see no mention of the oceans in there.

The 14-page document was proposed by congressional Democrats to tackle climate change with the goal of net zero global emissions by 2050 and the creation of new clean energy industries.

“My gut reaction was if this proposal doesn’t include the ocean, it’s just never going to be enough,” Dr Johnson told Dean of UNSW Science, Professor Emma Johnston at the Justice for the Oceans event last weekend.

The event was hosted by the UNSW Centre for Ideas as part of UNSW’s Science Week festivities.

Prof. Johnston, also a marine biologist who is focused on coastal ecology, led a discussion that explored the future of our oceans in this critical period of climate change.

“Because the ocean is bearing the brunt of a lot of impacts of climate…it has absorbed over 90 per cent of the heat that we’ve trapped with greenhouse gases,” Dr Johnson said.

“It’s absorbed about a third of the carbon dioxide we’ve emitted by burning fossil fuels and this has changed the ocean dramatically.”

Last year Dr Johnson co-authored the Blue New Deal, a roadmap for including ocean in climate policy, for Democrat Elizabeth Warren as part of her 2020 presidential campaign.

“What I thought of when I saw this congressional resolution [Green New Deal] was that ‘they’re leaving out a lot of solutions’,” she said.

“Because the ocean is not just a victim, it’s also a hero.”

Coastal ecosystems such as mangroves can absorb four times more carbon per hectare than a forest and provide protection from storms “which are increasingly frequent and severe”.

There are many other benefits of the ocean, such as offshore wind turbines, floating solar panels, tidal energy, seaweed and shellfish farming, “things that you don’t need to feed that absorb a lot of carbon and can be very nutritious…and provide a lot of jobs”.

Dr Johnson described how her fascination with the sea started as a child, growing up in Brooklyn, New York.

She didn’t often go to the beach but when she was five, her family took her to Florida where she learnt to swim.

“I went to the beach and I went on a glass-bottomed boat and I saw a coral reef for the first time,” she said.

“And I realised that there was this whole other universe and I wanted to know everything about it…I was like, why did no one tell me about this?”

Dr Johnson said while many of her fellow students at university were “experienced scuba divers, or who had grown up sailing or as lifeguards at the beach”, she had a more academic interest in studying marine science.

“Clearly there needs to be better management and learning that, after falling in love with something and then realising that it’s threatened, of course your reaction is, ‘well, what are we going to do about it?’

As the daughter of a Jamaican immigrant, Dr Johnson said she grew up understanding how deeply intertwined Caribbean cultures were with the sea.

“I was always so curious about, through [my dad’s] stories, and hearing that in his lifetime, the coral reef ecosystems of Jamaica had really crumbled before his eyes,” she said.

“It's the thought of a grandparent not being able to take their grandkid fishing, because there's nothing to catch, is heartbreaking.