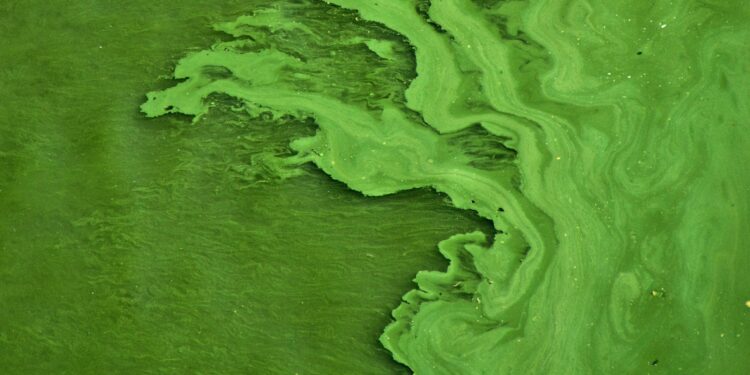 Algae can be perilous. In Southeast India, floating blooms are suffocating corals and fish. Since the early nineties, Lake Erie in North America has suffered yearly outbreaks that have rocked the local economy. At the peak of the 2021 bloom season, cyanobacteria covered 530 square miles of its surface.

Algae can be perilous. In Southeast India, floating blooms are suffocating corals and fish. Since the early nineties, Lake Erie in North America has suffered yearly outbreaks that have rocked the local economy. At the peak of the 2021 bloom season, cyanobacteria covered 530 square miles of its surface. Algal blooms are a natural phenomenon but industrial and agricultural pollution can contribute to their frequency and severity. When excess fertiliser washes into lakes and rivers, aquatic microorganisms multiply on the nutrient overload.

This aquatic ooze has massive health and economic costs. Some blooming species are toxic, poisoning animals that ingest them or releasing toxins into the air. Yet even harmless microalgae choke off underwater oxygen and light in large enough numbers. This slow death of habitats through nutrient pollution is called eutrophication. Conservative estimates for annual loss from algal blooms range from $1 billion losses for European coastal waters to $2.4 billion for lakes and streams in the United States.

Mississippi-Based company Algix has stepped into the fray, turning a biohazard into biomaterial. Co-founded by Mike Van Drunen and Ryan Hunt in 2010, Algix has become unique among algal biomass companies by using wild algal blooms. They source excess algal sludge from natural habitats all over the world, processing it into algae-based resin pellets trademarked under the brand name BLOOM. Manufacturers can blend BLOOM pellets with conventional petrochemical-based materials.

Ryan Hunt encountered the plastic potential of algae as a graduate student at the University of Georgia. Under heat and pressure, blue-green algae turn into polymers that have similar properties to their petrochemical counterparts. Unlike other feedstock like sugarcane and corn, algae do not compete with food agriculture for space and energy inputs. This especially applies to algae drawn from toxic blooms. Algae also have a much faster growth rate than land plants. This rapid growth is the bane of communities afflicted by the blooms, but it is a boon for Algix. It ensures an abundant and free supply of material that reduces overall costs for the business.

Yet there are drawbacks to using wild stock. “The composition of algae blooms can vary, and the ability to harvest and process them into value is very challenging. The composition of algae blooms does not generally contain oils for biofuels, nor are they pure  enough to be used for food or supplements.” Algix had initially wanted to break into the lucrative algal biofuels industry but decided to capitalise on the properties of wild blooms instead – their high protein content.

Algix’s first-ever product was an algae-based flexible foam that adds spring and comfort to footwear. This is BLOOM EVA, an acronym that stands for ethylene-vinyl acetate. Normally made from petrochemicals, this material is common in sports equipment. One hundred percent algae-based plastic is too brittle for industrial applications but when blended with conventional EVA however, it produces a resilient material with a reduced carbon footprint. BLOOM EVA was first rolled out as a foam traction pad for surfboards and is now used in shoes, sporting products, and accessories.