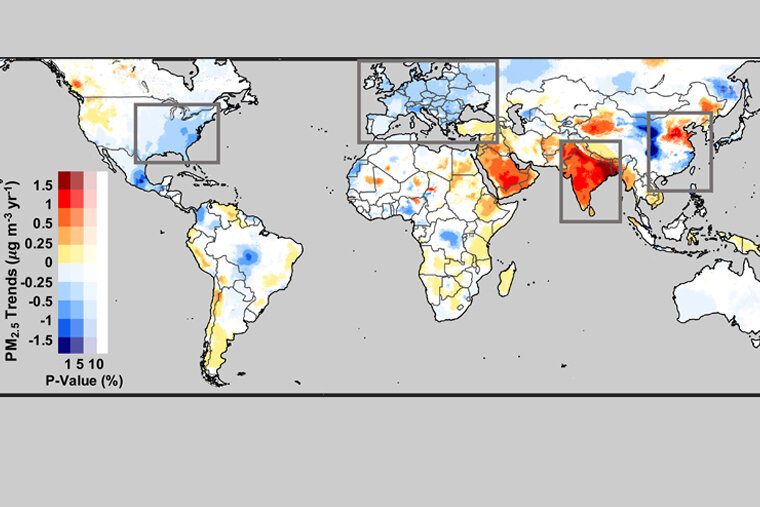 It is not unusual to come across headlines about pollution or global warming and find that they reach different conclusions depending upon the data source.

Researchers at Washington University in St. Louis used a harmonized approach, incorporating data from multiple satellites and ground monitors with computer modeling to compile a comprehensive, consistent map of pollution across the globe. Their data spans 1998-2018, providing a current picture of the state of the world's air quality that reveals some surprises, both for better and for worse.

The research was led by Melanie Hammer, a postdoctoral research fellow in the lab of Randall Martin, professor of energy, environmental and chemical engineering in the McKelvey School of Engineering.

Results of their study that looked at PM2.5—tiny particles that are able to make their way deep into a person's respiratory system—were published June 3 in Environmental Science & Technology.

"Prior studies that look at long-term PM2.5 haven't used data as recent as we have," Hammer said. Older data can't capture the results of many programs aimed at curbing pollution—even if they have been in effect for nearly a decade.

That turned out to be the case in China, where a significant drop in pollution in the recent past was the result of strategies begun in earnest around 2011. Other data sets don't capture the drop.

And in India—another area of concern—the story was not as positive. "It seems there's a bit of a plateau of PM2.5 levels," Hammer said. Though still, levels are not rising as steeply as other reports may suggest.

PM2.5 refers to the size of particles—2.5 microns. These tiny particles are created in nature, but also by human activities, including some manufacturing processes, car exhaust and the use of wood-burning cookstoves.

It's not easy to measure the amount of PM2.5 on the ground because there isn't any kind of comprehensive monitoring network covering the globe. North America and Europe have extensive monitoring systems, as does China. But, Martin said, "There are large gaps in ground-based monitoring. People can be living hundreds of kilometers away from monitors."