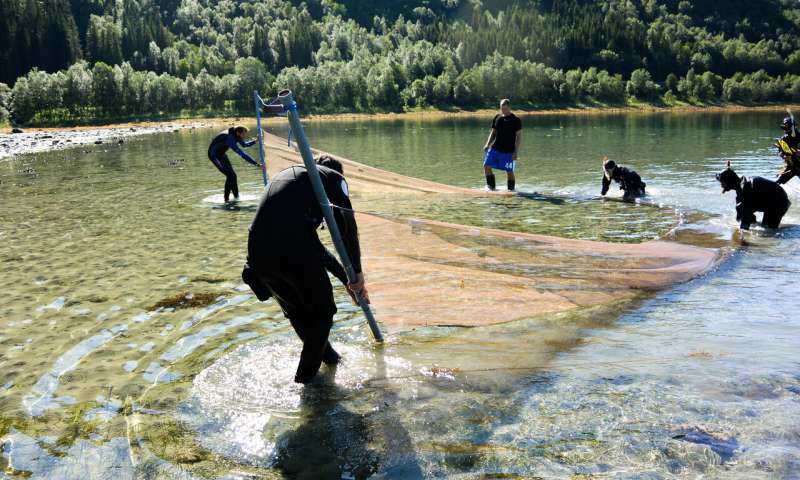 Where are small marine animals most vulnerable to getting eaten? The answer has big consequences for coastal ecosystems, where most of the world's fishing takes place, since predators can radically change underwater communities.

In a new study published in Proceedings of the National Academy of Sciences Oct. 26, an international team of scientists sketched the first global "BiteMap" showing where the ocean's mid-sized predators are most active. By fishing with dried squid baits called "squid pops," they discovered rising temperatures can shape entire communities of predators and have potential impacts lower down the food web.

"We know that communities around the world are changing with climate warming," said Emmett Duffy, co-author on the paper and director of the Smithsonian's Marine Global Earth Observatory program. But while warmer temperatures generally increase animal activities like eating, researchers are only just starting to grasp what those changes mean for marine ecosystems as a whole. "We might expect a soccer team, for example, to perform better in warm weather than in really cold conditions. But what if in the warmer conditions, the team switches out for different players? That can completely change the game."

"Every biology textbook has a world map showing patterns in temperature, rainfall, nutrients or plant growth, but not predator feeding, even though we know that predation can be as important as these other things for understanding ecosystems," said Jay Stachowicz, a co-author and professor of marine ecology at the University of California, Davis.

The new study was part of a project led by the Marine Global Earth Observatory (MarineGEO). Headquartered at the Smithsonian Environmental Research Center on the Chesapeake Bay, MarineGEO brings together partner researchers all over the world to understand what makes coastal ecosystems tick on a global scale.