International
The images are taken from the viral video posted by German surfer Sebastian Steudtner on Instagram.(Instagram/@sebastiansurfs) 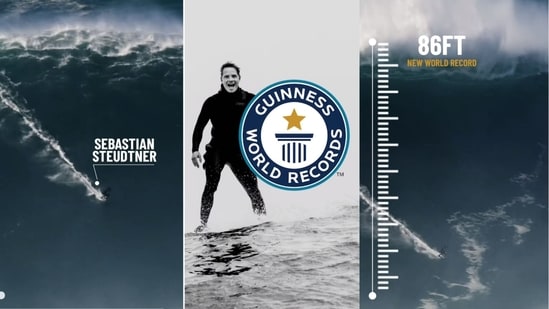 Guinness World Records took to YouTube to share a video of a German surfer Sebastian Steudtner attempting the world record against a massive 86-foot wave.

There is a saying, “The surest way to make your dreams come true is to live them,” and German surfer Sebastian Steudtner aptly exemplifies the phrase. He dreamt of becoming a surfer since childhood and now holds a record for surfing a colossal wave. A video of him attempting the world record against a massive 86-foot wave has gone viral on social media as it puts forth the scale of things out at sea.

Guinness World Records posted a video of Steudtner's achievement on their official YouTube channel with the caption: “The largest wave surfed (unlimited) - male is 26.21 m (86 feet), and was achieved by Sebastian Steudtner (Germany), off the coast of Praia do Norte, Nazaré, Portugal, on 29 October 2020. ”