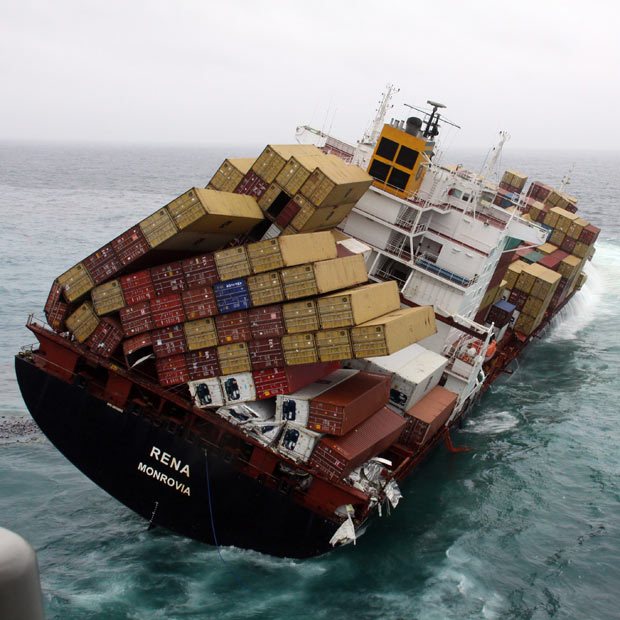 Shipping by containers has become a huge industry with more than 5,200 ships in the global container ship fleet now carrying about 20 million shipping containers around the oceans every year.

The size of container ships and the number of containers they can carry has increased with the expansion of our global exports and imports, with about 5-6 million of these steel boxes crossing the sea on ships at any one time.

As ships have become larger and containers have been stacked higher to carry more cargo, the risks of what have become known as stack attacks has increased. This refers to the collapse or failure of a large stack of containers under rough sea conditions. Because the containers are stacked as high as multistory buildings, the pressure on the pile of containers from the ship rolling from side to side in large waves can exceed the stability of the stack and the cabling that is holding them to the ship.

As the world becomes increasingly globalized, demand for shipping will continue to increase. Ocean shipping is still the preferred method of transport and as a result, we are likely to see increasingly larger cargo ships being designed and introduced. Today, the largest cargo ship can transport more than 21,000 TEU (20-foot equivalent) shipping containers, and Orient Overseas Container Line Hong Kong – the company that currently owns the largest cargo ship in the world – is looking to build even larger ones.

There is some uncertainty about just how many containers are lost at sea each year. While the World Shipping Council reported that from 2008 and 2019 there were 1,382 containers lost at sea each year or an average of four every day, another source says from 2,000 and 10,000 containers fall off each year, a big discrepancy. These can float at or just below the surface for hours, or in one documented case, 15 months as a lost container floated completely across the Atlantic from the Caribbean to Spain.

These lost containers have been labeled, UFOs, or Unidentified Floating Objects, and present significant hazards to smaller vessels, especially sailboats. The 2013 movie, “All is Lost” with Robert Redford, is a film about his sailboat colliding with a partially submerged container in the Indian Ocean.