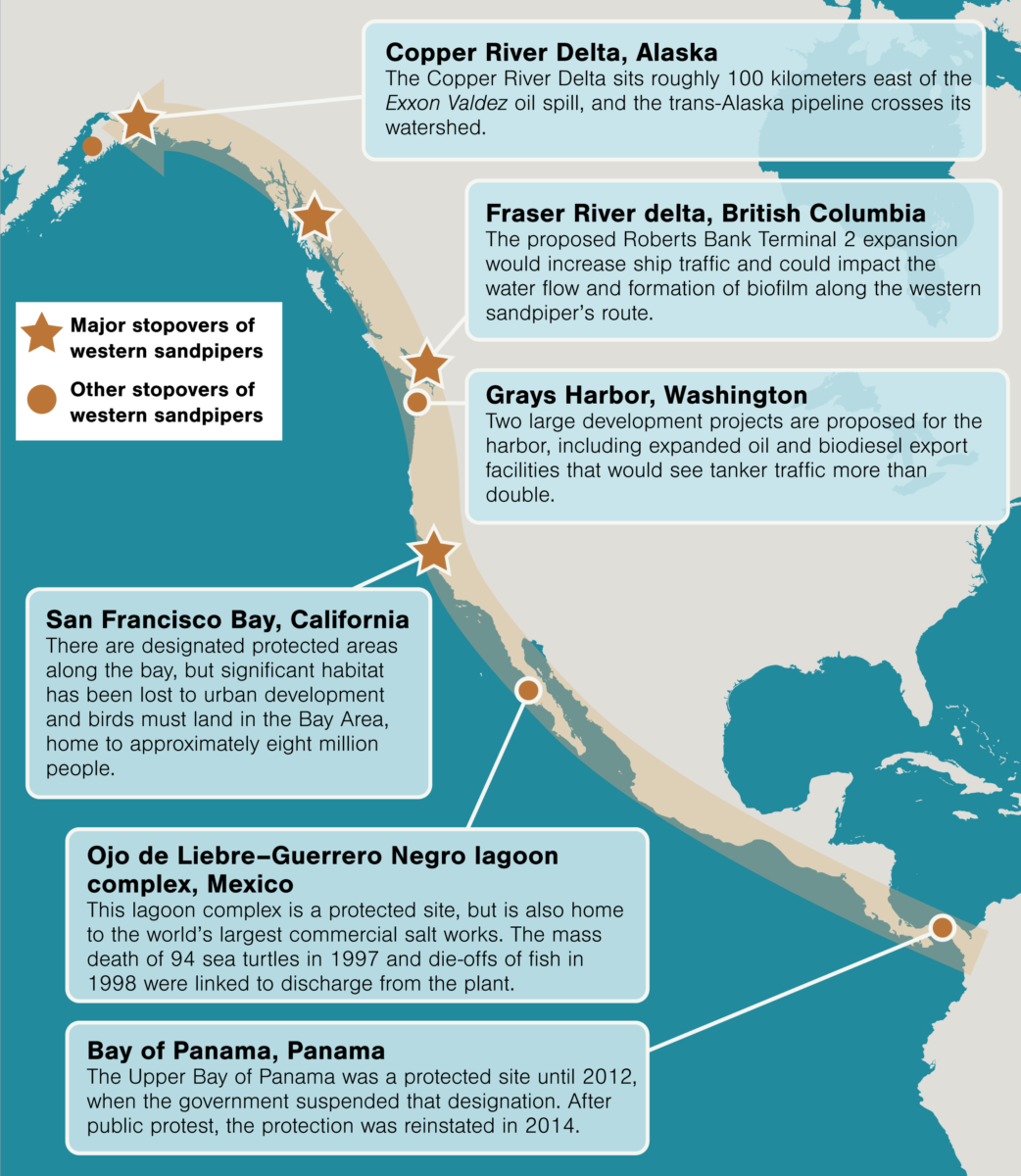 World - Flying by the Fat of the Sea

Scientists may have cracked an essential secret of shorebirds’ marathon migrations.

Thirty minutes’ drive south from the glassy condos and clogged thoroughfares of Vancouver, British Columbia, finds me near the end of a narrow dirt road flanked by farmland, where the Fraser River delta meets the sea. It’s 6:00 a.m., barely dawn on the last day of April, and alongside the road the Fraser’s south arm runs fat and sleek in its spring freshet, a bright ribbon snaking across the still-shadowy fields. I park beside the two scientists I’m accompanying for the day. We greet one another in hushed voices, close our car doors gently, fumble into hip waders. I pocket my notebooks and camera; the scientists shoulder backpacks and hoist coolers. The road ends in a grassy bank that marks the extent of all but the very highest tides; we’ve come as the tide is falling so must cross a final half kilometer of mud before reaching the actual Pacific Ocean. It will be a slog. Mudflats usually are; they’re not the most welcoming ecosystems. For humans, anyway.

We leave the road and clamber over massive tree trunks with time-softened edges, some of which are speckled with so much snow goose shit, pungent as ammonia, that the air reeks like oven cleaner. The driftwood yields to muck that sucks at our heels, then to shockingly green eelgrass swirling in pockets of seawater, and finally to bare mud that slips threateningly beneath the soles of my unfamiliar hip waders. We approach the crowd we’ve come to meet: the tens of thousands of western sandpipers that blanket the exposed mud.

They’ve set down here after flying thousands of kilometers from their winter habitat across the southern United States, Panama, and even as far south as Peru, leapfrogging along a chain of coastal mudflats that comprises the Pacific Flyway. They’ll stay for three to five days before flying north to Alaska, the last leg of their spring migration to Arctic breeding grounds. The flyway is traversed by millions of shorebirds from dozens of species each spring and fall. The sandpipers are here on layover and they have no time to waste. Today, each bird will eat up to seven times its weight in polychaete worms, arthropods, and other mudflat morsels, and will poop every two minutes.

My companions, research scientists Mark Drever and Bob Elner, start sorting their gear: cinder block–sized coolers, test tubes, paint scrapers, plastic baggies. Drever has studied various birds including ducks, woodpeckers, and seabirds for nearly 20 years, and since 2010 has focused on shorebirds with Environment and Climate Change Canada (ECCC). Elner, a scientist emeritus with ECCC, officially retired in 2008 after 17 years with the agency, but remains an active researcher. Both have spent much of their recent careers studying the western sandpiper’s grand migration, and they believe that they have uncovered one reason for the bird’s success. Today, they are gathering data to prove it—from the mud.