International
(Illustration of Pacific jet stream moving East through the US; Image: NASA) 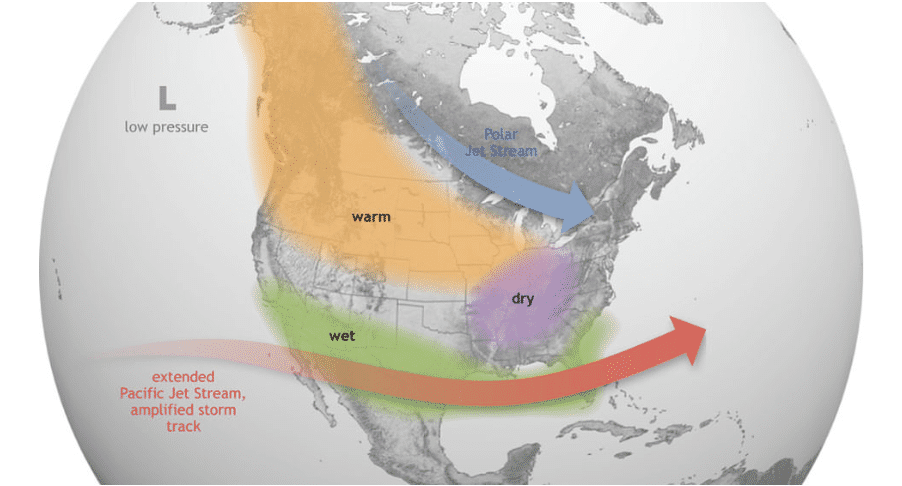 World - El Nino returns in 2023 after three years; What is it and how will it impact the climate?

El Nino, which means Little Boy, or Christ Child in Spanish, was first noticed by South American fishermen in the Pacific Ocean in the 1600s.

The phenomenon of El Nino is back after three years and its impact will be felt across the globe with a rise in temperatures later in 2023. According to NASA, the Earth was about 1.1°C warmer in 2022 than the average temperature in the late 19th century and it was the fifth warmest year for India since 1901, per the Indian Meteorological Department (IMD). Experts say that the current year will also see the temperatures rise making it difficult to limit global warming to 1.5°C.

What is El Nino?

El Nino, which means Little Boy, or Christ Child in Spanish, was first noticed by South American fishermen in the Pacific Ocean in the 1600s. It is a climate pattern which returns every three to seven years during the months of December and January due to the break down of the balance between wind, ocean current, oceanic and atmospheric temperature, and biosphere. As NASA explains it, winds blow westward during normal years and push warm surface water near Australia and New Guinea. When warm water builds up in the western Pacific Ocean, the cold waters, which are rich in nutrients, rise up from the depths of ocean just off the west coast of South America. Scientists say this cold nutrient-rich water is essential for the growth of the fish population.

What happens during El Nino is that the winds which push the warm surface water weaken and thus the nutrient-poor water occupies the entire tropical Pacific Ocean. As a result, the cold waters do not rise to the surface and the coastal waters near countries like Peru and Ecuador are unusually warm. This warm water, according to NASA, has a devastating impact on fishing crops, and the region experiences extremely higher than average amounts of rainfall. In contrast, El Nino may also cause severe droughts over Australia, Indonesia, and parts of southern Asia.

In addition to this, El Nino increases the chances of cyclones and typhoons in the Pacific even though it is known to lower the probability of hurricanes in the Atlantic.

"We know that under climate change, the impacts of El Nino events are going to get stronger, and you have to add that to the effects of climate change itself, which are growing all the time," Adam Scaife, the head of long-range prediction at the UK Met Office said per The Guardian. "You put those two things together, and we are likely to see unprecedented heatwaves during the next El Nino."