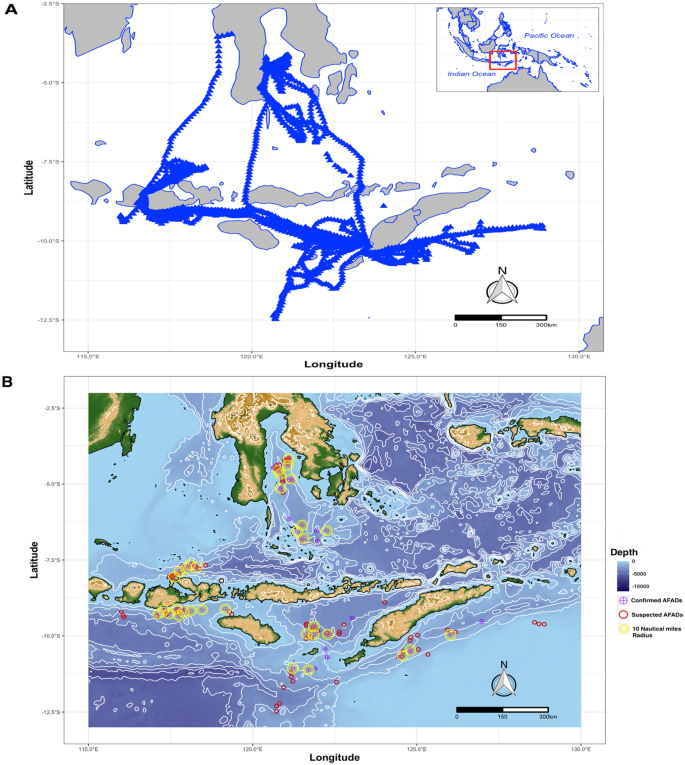 These devices are continually deployed at large scales, due to large numbers of users and high failure rates, increasing the difficulty of monitoring AFADs. To address this challenge, tracking devices were attached to 34 handline fishing vessels in Indonesia over a month period each. Given there are an estimated 10,000–50,000 unlicensed AFADs in operation, Indonesian fishing grounds provided an ideal case study location to evaluate whether we could apply spatial modeling approaches to detect AFAD usage and fish catch success. We performed a spatial cluster analysis on tracking data to identify fishing grounds and determine whether AFADs were in use. Interviews with fishers were undertaken to validate these findings. We detected 139 possible AFADs, of which 72 were positively classified as AFADs. Our approach enabled us to estimate AFAD use and sharing by vessels, predict catches, and infer AFAD lifetimes. Key implications from our study include the potential to estimate AFAD densities and deployment rates, and thus compliance with Indonesia regulations, based on vessel tracking data.

Since their widespread introduction in the early 1980s, artisanal fisheries have relied on Anchored Fish Aggregative Devices (AFADs) as a fishing aid to increase catch rates1,2. Various types of AFADs are used in the Indian and Pacific oceans; with deployments from the coastal zone (< 12 nautical miles from shore) extending far offshore out into the deep sea (to depths up to1500 m)1,3,4. Nowadays, AFADs are mostly deployed in developing countries where they play a vital role to the food security for coastal communities5,6,7. A key concern with AFADs is that most fish caught around AFADs are smaller than those caught using other gear types or fishing practices8,9,10.

In most countries and regional fisheries management organisations (RFMOs), the management of AFADs to date has focused on preventive actions such as temporal closures, regulations of gear types, and licence regimes11,12. These actions rely heavily on the compliance of fishers and do not address illegal deployments13,14. Moreover, vandalism and conflict over FADs make fishers reticent to disclose FAD locations6.

Typically, fisheries authorities have limited tools to conduct control and surveillance when it comes to AFAD management. Direct monitoring in the ocean has proven to be impractical and expensive15. The structure of AFADs, with no tracking device and only a small buoy as a position marker, means AFADs are hard to detect at sea16,17. Although it has been suggested to attach satellite buoys to AFADs, this option would be hard to implement in small-scale fisheries15. Furthermore, aerial surveys, which can cover large sweeping areas are generally too expensive, particularly in developing countries18. Hence, identifying lower-cost solutions to monitor AFAD use is of relevance, particularly in small-scale fisheries.