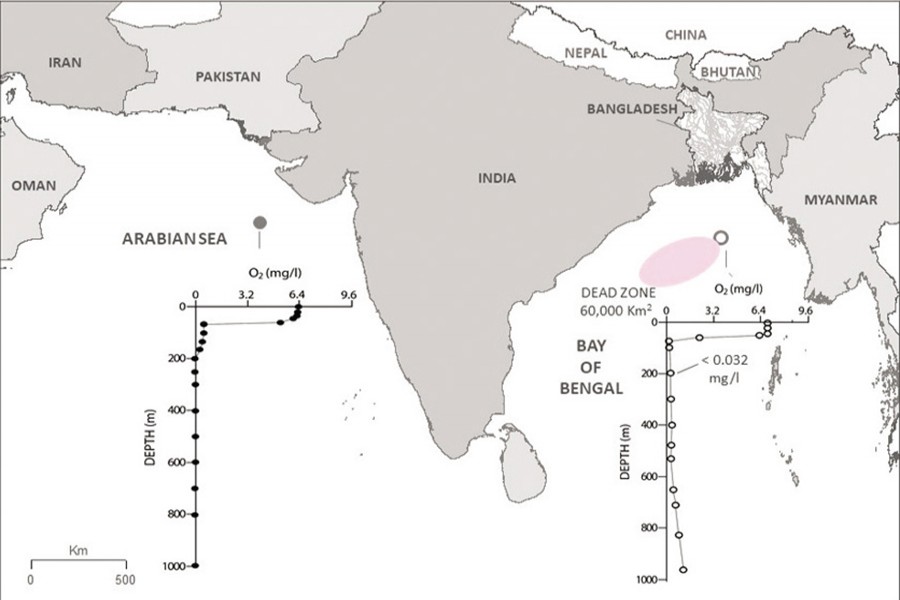 World - Dead Zone in the Bay of Bengal

A Dead Zone in the Bay of Bengal (BoB), nearly half the size of Bangladesh and at depths 70m and below, has been discovered in recent years by a group of multinational scientists, Bristow et al., (2016).

This oxygen-depleted zone, called hypoxia, is the third largest Oxygen Minimum Zone (OMZ) in the world after the OMZs in Eastern Tropical Pacific Ocean and the Arabian Sea. Unlike its neighbouring Arabian Sea, the Bay of Bengal OMZ is somewhat different in nature. It still shows a trace of oxygen at 70m depth and below, ranging from .032-.064 mg/l, albeit way below the Oxygen level (5 mg/l) needed to support aquatic life and other uses. On the other hand, the Arabian Sea has no oxygen, causing devastating effects on its ecosystem and losing its Nitrogen balance unlike any other ocean in the world.

The Arabian Sea OMZ contributes 20 per cent of the global ocean denitrification (loss of nitrogen) budget and has been identified as a hotspot of oceanic efflux of N2O, a greenhouse gas. Toxic algal bloom and massive fish kills are rampant in both the flanks of the Arabian Sea (Indian and Omani coasts) caused by the southwesterly summer monsoon winds which trigger upwelling circulations and bring the nutrient-rich and oxygen-depleted bottom ocean water into the shore. Fortunately, the Bay of Bengal OMZ hasn't gone to that level yet, but it is at the tipping point. Evidence shows that the Bay of Bengal OMZ is alarmingly expanding as reflected by its intensification. The trend is set to continue due to global warming, changing river runoff and circulation patterns in the Bay of Bengal.

Anthropogenic inputs of nutrients, such as Nitrogen and Phosphorus, and organic Carbon, discharged into the Bay of Bengal by the rivers across the region, have adverse effects on the OMZs. The nutrients inputs to the Bay are increasing due to elevated level of fertilizers being used in modern agricultural practices to meet the demand of foods for 400m people in the region. The potential ramifications of this OMZ are large and it has thus been the subject of multiple international research efforts. However, a conspicuous absence of awareness among Bangladeshi policy makers has become a growing concern for the scientific communities.