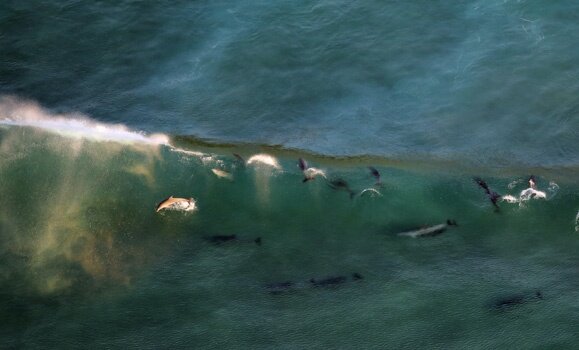 World - Danger in the Deeps: COVID‑19 Spread Through Wastewater Could Devastate Some Marine Mammal Species

Certain species of whales, seals and other endangered marine mammals could fall victim to COVID-19 infection through wastewater and sewage that seeps into their marine habitats, researchers at Dalhousie say in a new study that has found some of the animals to be highly susceptible to the virus.

In a study published in Science of the Total Environment, the team describes how it used genomic mapping to determine which marine mammals would be vulnerable to SARS-CoV-2, the virus that causes COVID-19. They looked at key amino acids that the virus binds to and found that there were striking similarities between those in humans and in several marine mammals, including dolphins, beluga whales, seals and sea otters.

Graham Dellaire (shown left), director of research in the Department of Pathology at Dalhousie, led the research that used a modeling approach to predict a marine mammal's susceptibility to SARS-CoV-2. The team found at least 15 marine mammal species were susceptible to infection from SARS-CoV-2 because of their ACE2 receptors—the critical protein required for the virus to enter and infect the cell.

Importantly, more than half of the species determined to be vulnerable to SARS-CoV-2 are already at risk globally.

"Many of these species are threatened or critically endangered," says Dr. Dellaire. "In the past, these animals have been infected by related coronaviruses that have caused both mild disease as well as life-threatening liver and lung damage."