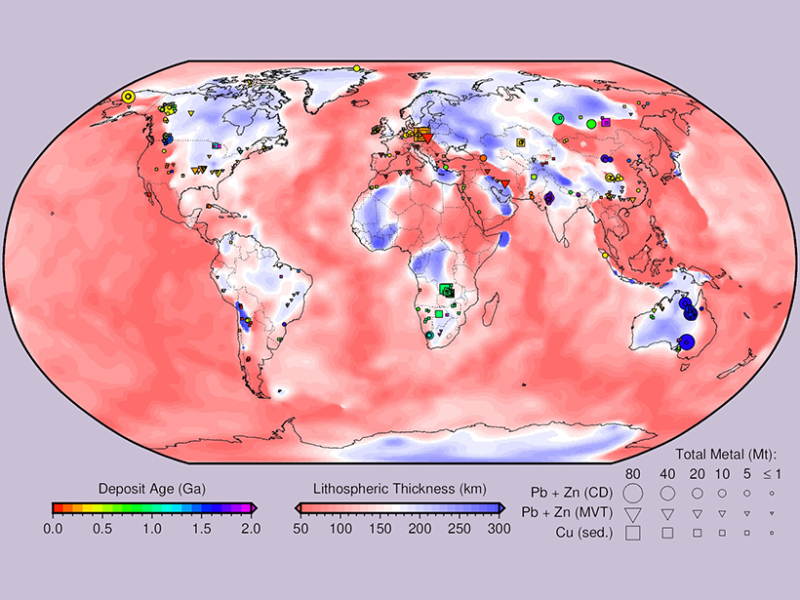 A new map of the thickness of Earth’s lithosphere contains clues to large deposits of key metals.

The search for deposits of lead, zinc, copper, and nickel might soon become much less of a hit-and-miss activity. Instead of trying their luck over wide areas, mining companies should focus their efforts—and billions of dollars in exploration expenses—on the contours of thick, old pieces of lithosphere strewn across Earth’s continents: cratons.

Lithospheric thickness can serve as a treasure map, according to Mark Hoggard, an Earth scientist at Harvard University and Columbia University, and his colleagues from the United Kingdom and Australia. They reported their findings in Nature Geoscience.‍

Metals are ingredients of many rocks, but to be exploitable, some process must concentrate them into localized deposits. For lead, zinc, copper, and nickel (collectively known as base metals), such deposits are either magmatic, associated with volcanism, or sedimentary, associated with material collected at the bottom of an inland body of water.

Sedimentary deposits generally provide the biggest jackpot for mining companies, with some finds containing more than 10 megatonnes of metal. With magmatic deposits, only those of copper seem to be able to reach that size.

Such giant deposits are sorely needed. “At the moment, due to massive advances in mobile technology and the need to decarbonize the global economy, we are needing more and more metals,” said study coauthor Fred Richards, an Earth and planetary scientist at Harvard University and Imperial College London. In-demand metals include “lead, zinc, copper, and nickel, but also lots of other metals that are accessories to these big deposits, such as cobalt, which goes into car batteries.”

Considering that about three quarters of the world’s continents are covered by sedimentary basins, knowing to start looking there is of little help in detecting giant deposits. A first hint at how to limit the search space came from northern Australia, where Hoggard and his colleagues noticed that a number of large zinc deposits line up rather neatly along an arc. But it wasn’t clear what geological feature was connected to that shape.