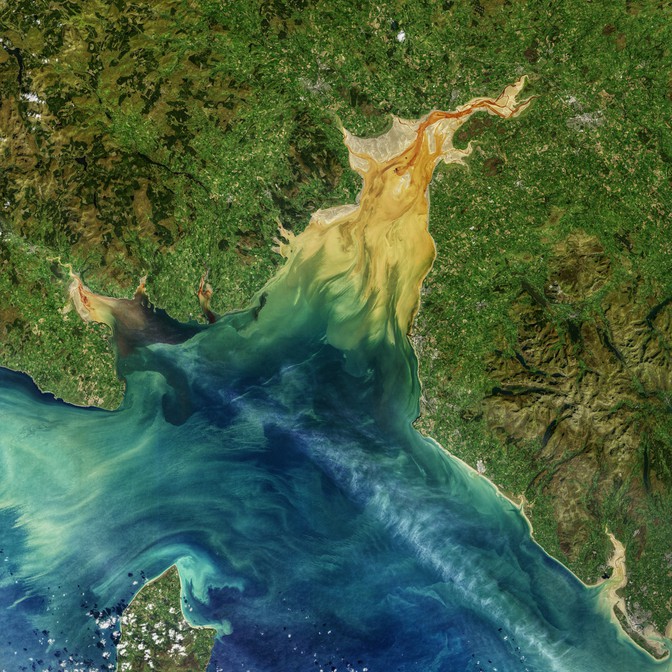 Murky water poses a growing threat to all sorts of marine life.

Around the world, coastal waters are steadily growing darker. This darkening—a change in the water’s color and clarity—has the potential to cause huge problems for oceans and their inhabitants.

“It’s affecting the quality of the sea we know,” says Oliver Zielinski, who runs the Coastal Ocean Darkening project at the University of Oldenburg in Germany. These “changes in the physics will lead to biological changes,” he adds.

Some of the causes behind ocean darkening are well understood: Fertilizer might enter the water and cause an algal bloom, or boats might stir up light-blocking silt. But other causes are murkier. During heavy rains, for instance, organic matter—primarily from decaying plants and loose soil—can enter oceans as a brown, light-blocking slurry. This process is well documented in rivers and lakes, but has largely been overlooked in coastal areas.

Maren Striebel, an aquatic ecologist also with the Coastal Ocean Darkening project, showed the power of this phenomenon in a large-scale experiment.

In the study, Striebel and her team filled huge metal vats with water, phytoplankton, and silt. From peat, the team extracted a brown liquid as an approximation of the dissolved organic matter found in coastal waters. They put low, medium, and high concentrations of the liquid in the vats, and hung lamps above them to mimic the sun’s rays.

Over the first few weeks, the peat extract decreased the light’s ability to penetrate the water by 27 percent, 62 percent, and 86 percent, respectively, for the low, medium, and high concentrations. The phytoplankton suffered from the lack of light—primarily in the medium- and high-concentration vats.