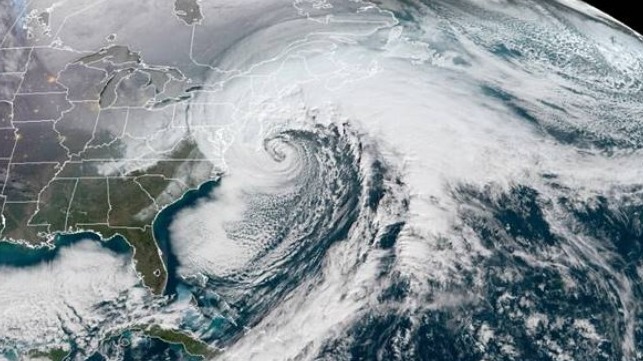 While frequent debates occur over the causes of climate change, the reality of a changing climate over the past 50-70 years cannot be disputed.

From a meteorological and oceanographic perspective, there have been other “signs” of changing weather patterns and warming oceans:

1) Increasing frequency of “bomb cyclones” across many parts of the world, including off the U.S. East Coast (image at top) and across the Aleutians and Gulf of Alaska. A recent storm off the Aleutians in late December set a record low pressure for this region, with a minimum pressure equivalent to a Category 4 Hurricane.

4) Sea levels are rising across the globe due to melting of glaciers and ice sheets. Global sea level has risen about 20 cm (8 inches) in the last century. The rate of increase has “doubled” in the last two decades.

5) Sea ice is decreasing in most parts of world in view of warming global temperatures.  Greenland and Antarctica ice sheets have decreased in mass consistently since 1993.

While the above issues are certainly of interest (and concern) for most people, they have a particular impact on the shipping industry.

Stronger and more frequent storms (both tropical and winter-time) are resulting in significant impacts to typical maritime trade routes. Vessels are often required to adjust planned routes to minimize or avoid heavy weather impacts, potentially resulting in delays and additional bunker consumption. Vessels which are not using a weather routing company may experience significant delays, or in worst-case scenarios, loss of cargo or damage to the vessel. Added delays or potential for “damage” equals added cost to the maritime sector.