International
via Swiss Re Institute 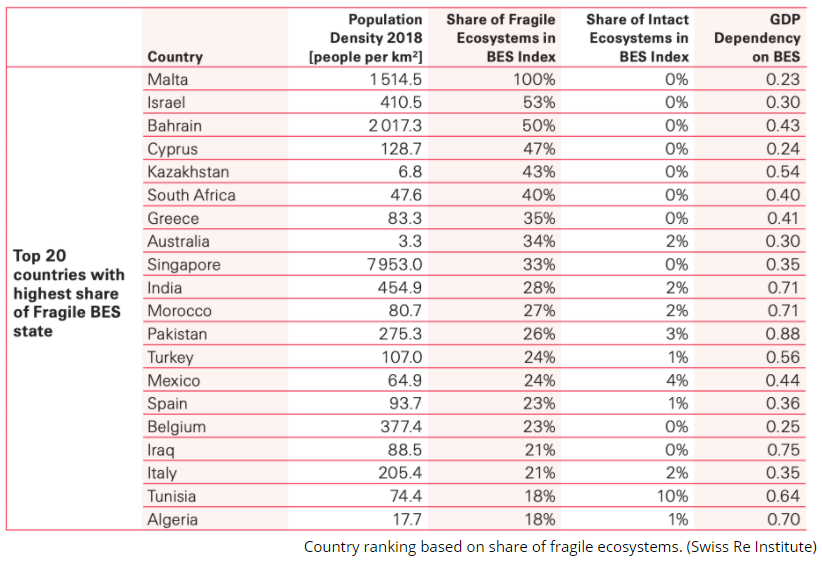 The world's wealth is built on our planet's natural ecosystems, and if those collapse, so too might our global economy, experts warn.

A new insurance index from the Swiss Re Institute has found just over half of all global GDP - nearly 42 trillion US dollars - is dependent on goods and services provided by the natural world.

In many places around the world, however, that sturdy foundation is turning to sand.

The report, referred to as the Biodiversity and Ecosystem Services Index, shows a fifth of the world's countries currently stand on fragile ecological ground, with more than a third of their land disrupted by human activity.

That's 39 countries with ecosystems that could be at risk of collapse, largely due to widespread declines in biodiversity, whether that be from deforestation, farming, mining, run-off, invasive species, or a decline in pollinators.

The index was designed to give governments and businesses a benchmark for the state of local ecosystems important to their economies, in the hope that the data can help inform relevant insurance solutions for communities at risk.

Developing nations in the index with large agricultural sectors - like Kenya, Vietnam, Pakistan, Indonesia, and Nigeria - are particularly at risk due to their GDP's reliance on natural resources, but "densely populated and economically important regions" such as Southeast Asia, Europe, and America are also exposed to risk despite their economic diversification.