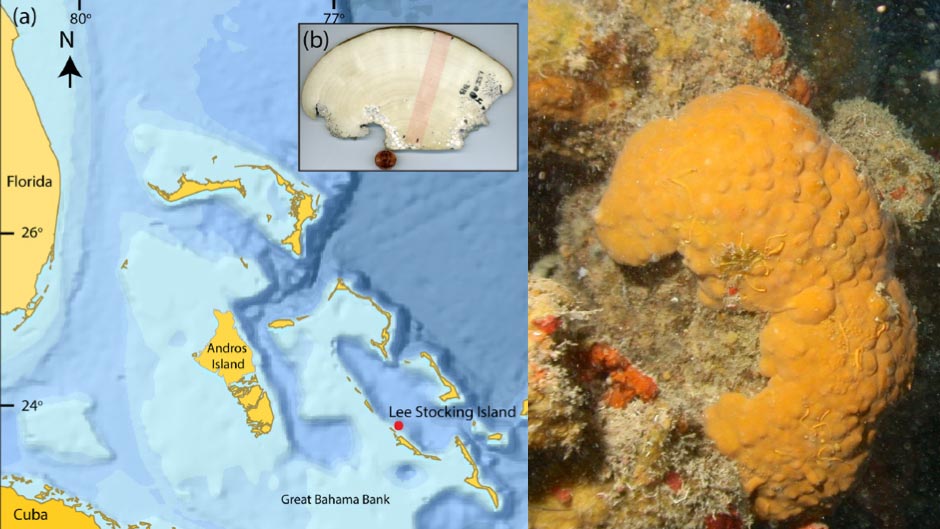 Scientists used a 600-year-old marine sponge to reconstruct a record of ocean temperature in the North Atlantic revealing past volcanic activity as well as the current global warming trend from the release of carbon dioxide and other heat trapping gasses into Earth’s atmosphere and absorbed by the oceans.

The University of Miami (UM) Rosenstiel School of Marine and Atmospheric Science-led research team used geochemical proxies to reconstruct a 600 year-long record of Atlantic Ocean temperatures from the skeleton of a sclerosponge (Ceratoporella nicholsoni).

The basketball-sized sclerosponge was collected via submersible more than 430 feet (133 meters) below the surface in Exuma Sound, The Bahamas by the study’s senior author Peter Swart, a professor of marine geosciences at the UM Rosenstiel School. Sclerosponges are slow growing marine organisms with a soft outer body and hard limestone skeleton that record upper ocean temperature and climate conditions.  Although individuals could be as old as 1000-2000 years their distribution is poorly documented because of the difficulty and expense of collection.

“Atlantic Ocean temperatures fluctuate on various timescales, including multi-decadal, and this influences the weather and climate in North America, Europe, and Africa,” said Swart. “This 600-year-long temperature reconstruction can help us understand how the climate has changed in the past so that scientists can better project how conditions may change in the future."

To understand environmental changes beyond what modern instruments can provide, scientists turn to long-lived marine organisms like Sclerosponges that record ambient environmental conditions in their skeletons.