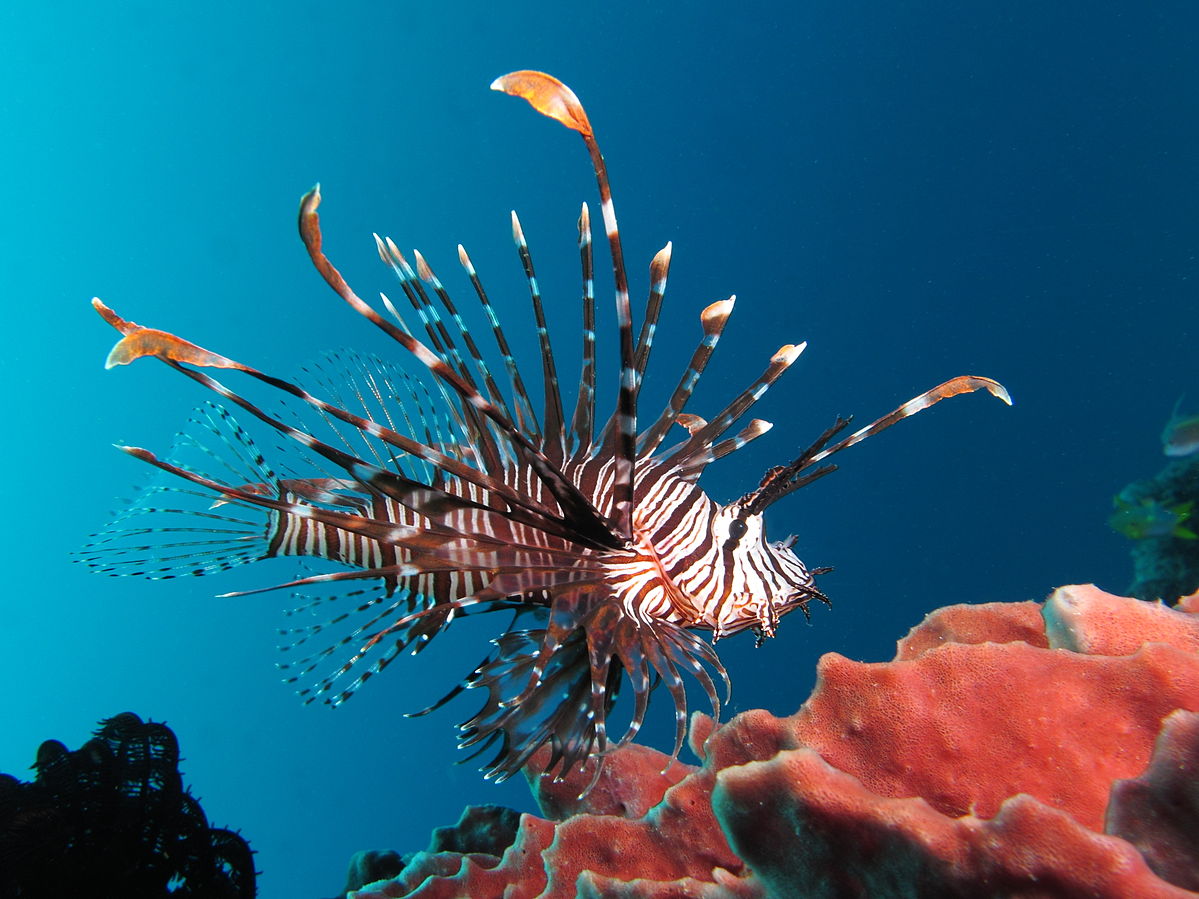 As if there aren’t enough negative things happening to damage the environment already, now we have the lionfish as an added threat to the seas and oceans of the world.

The lionfish (scientific name Pterois volitans) is a colorful fish, red, brown and white, and it grows to about 12 inches long. This ornate fire-fish originally inhabited the tropical waters of the Indian Ocean, the western and central Pacific Ocean, and the seas near Indonesia. One of the best-known species is the red lionfish, which people often purchase for their saltwater aquariums.

According to the World Resource Institute (WRI), the fish was first spotted along the southeastern coast of Florida as far back as 1985 but it was not seen as a threat at the time. Unfortunately, to the chagrin of scientists, it has become a huge problem for the Atlantic and Caribbean fishing industry and ecosystem.

How did we get here? Well, some oblivious citizen who owned the fish as a pet may have flushed it live or dumped it into the ocean. According to the Smithsonian magazine, as few as three lionfish may have started the invasion. Nobody really knows. However it got there, they were found along the east coast from Florida into the Gulf of Mexico and throughout the Caribbean Sea. The rapid spread of the lionfish has led scientists to categorize them as an invasive species because they wreak havoc on the environment where they live.

Here are some key facts you should know about why the lionfish are so dangerous:

The lionfish has an insatiable appetite. They consume over 50 other species of fish and are killing off the food source of surrounding islands.

The venomous spines of the lionfish keep it safe from all the other marine life. Scientists are frantically working to find a predator to devour the fish or at least keep the population down.

Unlike other fish, a female lionfish can produce eggs all year round. She deposits more than 2 million eggs per year, which adds to the exploding population.

They seem to be able to adapt to any environment. They can live in coral reefs and mangroves, and at depths that are shallow and depths ranging to more than 984 feet.

WRI says the lionfish are destroying the coral reefs of the region. “This is a region where more than 42 million people depend on the coral reefs for food and their livelihood,” WRI says. “The lionfish invasion could have serious socioeconomic implications. Commercial fisheries may suffer losses as lionfish either prey on economically important species, such as snapper and grouper, or compete with those species for food.”

Lionfish could even impact the Caribbean’s $2.1 billion tourism industry, which includes snorkeling, glass bottom boat excursions and deep-sea diving. Divers, swimmers and fishermen also run a risk of getting stung if they are not educated on the danger that the venomous fish poses to them.

Governments across the Caribbean region have been forced to develop lionfish management plans, with the hope that they can bring the populations back to a manageable level. They are doing public education on how to properly catch, prepare and consume lionfish; a lionfish derby is being promoted wherein divers compete to see how many fish they can catch and remove from protected areas; and they are monitoring lionfish populations and growth patterns, as well as doing research to find a lionfish predator to eat the fish.