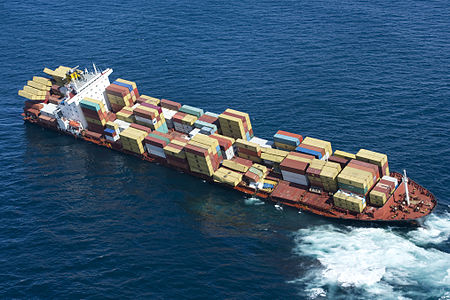 It would be tempting to hope the recent stranding of the 1,300-foot, 220,000-ton Ever Given container ship in the Suez Canal was a one-off — just a case of a very big ship getting stuck in a narrow waterway. But more than 100 ships of similar size are plying the world's waterways, and even bigger ones are being built in Asia, creating logistical challenges and concerns about more mishaps in the future.

Capt. Andrew Kinsey, a senior marine-risk consultant for Allianz, a global financial services firm, says with heavy weather in the North Pacific Ocean over the past year, a lot of containers are going overboard.

"We have seen some ... spectacular losses of cargo, with vessels losing a lot of containers," he says.

Part of the problem is the way the ultra-large ships — capable of carrying 10,000 or more cargo containers — handle at sea with towering stacks of containers, especially in strong winds.

Kinsey says one of the more high-profile cases occurred in November, when a Japanese-flagged vessel, the ONE Apus, lost more than 1,800 containers, holding cargo worth an estimated $200 million, northwest of Hawaii during high winds.

Some container lashings failed, Kinsey says, and the cargo, bound for the U.S. from China, went over the side. Other containers stacked up on board collapsed and "tumbled like a house of cards," he says.

Investigations into the incident continue, and the ship is now back at sea.

Alan Murphy, chief executive of SeaIntelligence, a container-shipping research and advisory firm in Copenhagen, Denmark, says it's difficult to gauge whether there has been an increase in the number of containers going overboard or if trans-Pacific container losses over the past year have just received more attention.

In a November report, the World Shipping Council, an interest and lobbying group for the shipping lines, found the number of such incidents to be falling in recent years, although the report does not cover 2020.