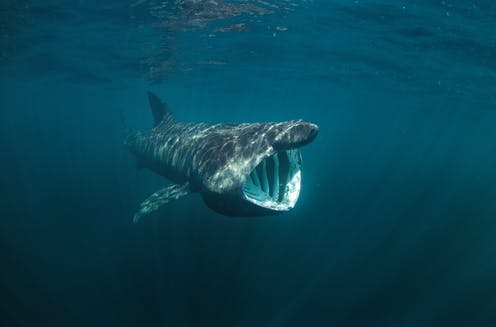 Picture the scene. Swimming off Scotland’s west coast during a summer holiday you notice a large dark shark nearly 10 metres long headed towards you.

A prominent triangular dorsal fin cuts the surface, the powerful rhythmically beating tail driving it silently through the cloudy green depths. You’re transfixed by a cavernous mouth large enough to swallow a seal.

Musing this may be your last swim, it might be surprising to learn this leviathan of the deep is a harmless yet endangered gentle giant. It has little interest in humans, focusing on some unseen bounty of the warmer summer waters: zooplankton, the tiny creatures found near the surface of the ocean.

This is the basking shark (Cetorhinus maximus), once common off western Europe, feeding on the annual plankton bonanza of the European shelf.

Our recent study suggests holidaymakers and basking sharks have much in common. They make temporary forays into these higher latitudes, travelling familiar routes with extended family, feeding on local fare at well-known places visited on previous trips.

Areas supporting high densities of zooplankton are like tourist traps, drawing basking sharks from across the Atlantic in late spring and summer. Hundreds converge in inshore surface waters on the Scottish west coast, Ireland and Isle of Man.